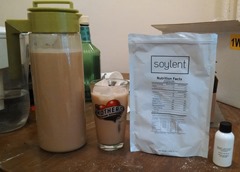 Remember how much resistance there used to be to e-books? You still see some of it, though it seems to be growing less and less pronounced over time. Seems like people worried that the presence of a new way of doing things like reading books would mean that the old way was destined for the trashbin of history, and they loved the smell of paper and ink and tactile feel of paper books too much to want to give that up.

Well, happily, it looks like paper books are still going to be around for a good long while, no matter how popular e-books get. But you see that same impulse, the fear of the new replacing the old, in a number of places. One of those is the “food substitute” Soylent, that’s gotten a good deal of press since its Kickstarter last year.

Soylent came about when an electrical engineer named Rob Rhinehart got fed up with the difficulty, expense, and amount of time necessary to put together a balanced diet and started looking at the problem from an engineer’s perspective. Over the last couple hundred years or so, we’ve developed a fairly complete nutritional understanding of the minimum quantities of various nutrients required to sustain a human body. It should, theoretically, be possible to mix something up containing those necessary nutritional requirements and live on that. And so Rhinehart did just that.

There’s been a good bit of controversy about it as various news outlets have tried it and been disgusted or intrigued. There has been some panic at the very idea of the stuff, possibly stemming from the same fear of loss as the reaction against e-books I mentioned—in this case, the idea that all food will be replaced with nutritional sludge, like in some bad science fiction novel. (And I’m really tickled that there are a few people who refuse to try it because of the name. I guess a rose by any other name would just suck, wouldn’t it?)

I think Lee Hutchinson at Ars Technica gets it exactly right in this article about how the point of Soylent is not to replace all real food for everyone, but to provide a reasonably healthy alternative to fast or frozen food. On the other hand, some people express concern that it uses ingredients probably sourced from GMO crops. And there are those who just don’t like the taste.

But enough of what other people have to say. I’m going to talk about my personal experiences with the stuff. I kicked into the Kickstarter last year, and after a number of shipment delays finally got my first week’s supply last week. I’ve gone through five days’ worth so far, and ordered another two weeks to see me through until my next paycheck when I can hopefully start ordering month to month and saving some money. In case you might not have guessed, I like the stuff.

I’ve experimented with food-replacement shakes before, like Ultra Slim-Fast shakes or Ensure—mainly as a means of saving time on breakfast so I could sleep later. They tasted all right—kind of like chocolate milk with benefits—but they weren’t very filling. If I were planning on losing weight and tried drinking one for breakfast and one for lunch then eating a normal dinner, like the commercials touted, I’d have given up and raided a vending machine for snack food by early afternoon. And I’m a pretty skinny guy already; I can’t imagine how someone accustomed to a higher caloric intake would get by, and they’re the ones who need these things the most.

But Soylent was different. The first time I tried it, I thought it tasted kind of like milk. Not in terms of having a similar flavor, but of having the same sort of flavor—a sort of bland not-quite-sweetness that doesn’t get in the way of gulping it down. In fact, I was kind of surprised by how much it wasn’t sweet. The only hint of sweetness to it at all is provided by a very small amount of the artificial sweetener Sucralose (intended to balance out otherwise unpleasant flavors rather than specifically sweeten the stuff). And this is supposed to contain all the daily carbohydrates a body needs, including sugars. Can there be any doubt we all eat way too much sugar?

I experimented with flavoring the stuff in different ways. I couldn’t tell much difference adding vanilla to it—it tasted pretty vanilla-like already thanks to the inclusion of vanillin, the chemically-synthesized active ingredient from vanilla. It mixed well and tasted good with Trader Joe’s “Midnight Moo” chocolate syrup. But it really is surprisingly decent just taken straight. (It’s all right mixed fresh, but for best results, you should leave it in the fridge for several hours, preferably overnight, to let it thicken.)

My favorite use of it is for breakfast. It’s almost certainly more healthful than the alternative—a couple of doughnuts from a local doughnut shop, or a biscuit and gravy or bacon and eggs from the work cafeteria. It’s a cinch to prepare—just shake the pitcher and pour. And it really does stick with you. After a Soylent breakfast, I’m not hungry at all until lunch.

I haven’t tried living on it exclusively for a long period of time; I’ve been stretching the supply by eating normal lunches at work (and they also recommend easing into consumption of it to give your digestive system a chance to get used to it). When I get my full supply, I might start taking it in a bottle and see what it’s like.

But I can already say that I love the convenience, and not just for fast breakfasts. Over the weekend, it was great to have a “meal” I could just pour, gulp down, and get back to what I was doing right away. No searching my pantry and fridge and agonizing over the decision of what to make, no waiting for it to nuke, no dirtying up any other dishes than just a glass, and certainly no going to the trouble of getting my bike out and going somewhere else to eat probably unhealthy fast food. No temptation to blow $20 on ordering delivery food either.

I can’t overstate how important that is to me. I do like cooking the odd meal now and then, and I did a lot of it (mainly to save money) over the months I was unemployed before starting my new day job last month. But now that I’m working 40 hours a week, I find I lack the time and energy to do much of that kind of thing when I get home. Up to now it’s been largely cheap frozen dinners, pizzas, etc. leavened with the occasional fast food takeout. But now I’ve got a fast, convenient, more healthful alternative.

Some might question the wisdom of trying to live off a “food substitute” when it’s possible we might still not know some key fact about human nutrition that might only come out after long-term use. (Though Rhinehart himself has been living almost entirely on it for months without deleterious effects.) Others might quibble that the ingredients are not the best they possibly could be. But I suspect the wisdom of a long-term diet of microwave dinners and fast food is even more questionable.

Even so, I’m not buying into this expecting huge health benefits, though I’ll take any I can get. I mainly want the convenience, but it’s also nice to know I’m not eating something with more sugar or fat than I need. If it’s a choice between eating something that takes time and I know isn’t as healthful as it could be, or eating something fast and provably better in at least some ways, well, I’ll take what’s behind door number two. No point letting the perfect be the enemy of the good enough.

Which isn’t to say I couldn’t still eat regular food if I felt like it. I did go out to a Chinese buffet for dinner one night…though given the lackluster quality of the place, I almost wished I’d stayed home with my Soylent afterward. And for the moment, in order to eke out my supply until the next batch arrives (they’re shipping it tomorrow), I’ve started rationing my remaining Soylent to breakfasts only.

One of Larry Niven’s “Niven’s Laws” states that you shouldn’t waste calories—if you’re going to be bad and eat junk food, it should be the best junk food you can find, because that way you get the most enjoyment for your empty calories. With Soylent, you can extend that law to real food. If you’re going to go to the trouble of eating regular food, make it special. Otherwise, you might as well just drink Soylent and save time, trouble, and nutrition.

It would be nice if the stuff were a little cheaper than $3 to $4 a meal, but I suspect it will get there over time. It seems a little pricey, but my suspicion is that based on how often I’ve been inclined to eat out, I might actually end up saving money on average. I could save even more money by mixing up my own based on one of the many home-grown formulas that sprang up in the wake of Rhinehart open-sourcing Soylent, but then we get into the issue of convenience again.

Customers ordering Soylent for the first time may have to wait a few weeks to get their first shipment, but the nice thing is that they’re committed to filling reorders first, so people who’ve already gone onto Soylent don’t have to worry as much about running out of it. There’s also a discount in place for monthly reorders. I think I’m going to be taking advantage of that before too terribly long. The first batch comes with a rather nice two-quart pitcher with a sealing lid (originally meant for iced tea, but it works great for shaking Soylent) and a sturdy metal 4.5 ounce single-serving Soylent scoop (try saying that five times fast!).

More convenient than the original format, not quite as good in other ways, controversial and misunderstood for attempting to “replace” the original, of serious interest to geeks and early adopters…Soylent really is the “e-book” of food. And I’m really looking forward to my next shipment getting here.