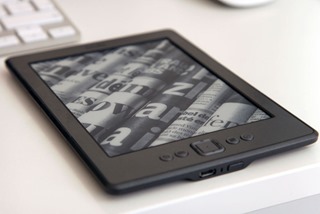 Emarketer has an interesting piece suggesting that e-reader usage is still growing over time. In particular, it predicts the number of e-reader users will grow by 3.5% by the end of this year, to 86.3 million people. The statistics also suggest there will be almost 6 and a half million more e-reader users by the end of 2020.

The Emarketer article notes that people 65 and older are especially interested, given e-readers’ “lower price point and single-focus functionality.” Tablets’ market share is about twice that size, growing 4.7% this year to 166.7 million users, and for the first time this year more than half of the US population will use a tablet. The age of tablet users tends to skew lower, while e-reader users tend to skew higher. 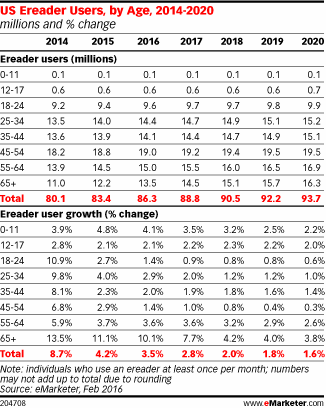 The interesting thing here is that these statistics seem to be at odds with other statics I found showing e-reader sales falling drastically since 2011. But the statistics may not be so contradictory after all. Given that it doesn’t take that much processing power to read an e-book, and e-readers haven’t improved that much year over year, it seems likely that most people who have older e-readers aren’t seeing the need to replace them. Hence, a larger-than-usual portion of those sales that are still taking place might be to new users.

It’s interesting to see that e-readers still have a strong following, even as tablets are now more popular. If these statistics can be believed, fully half as many people use e-readers as tablets—so they could well be around for some time to come.