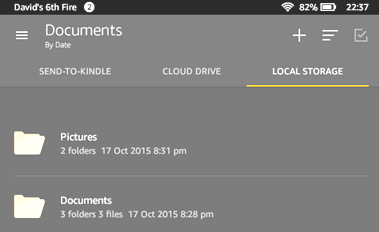 When TeleRead Editor Chris Meadows first wrote about his $50 Kindle Fire Tablet, he revealed that the Reader app did not detect personal documents that he had loaded onto a memory card.

After two days experimenting with my own Fire Tablet (review coming soon), I can report that the issue is not just about the memory card vs. internal storage. It’s about how Amazon treats personal documents—they are not actually ‘books’ anymore! And they’re farmed out to a special ‘documents’ application, shown in a partial screen shot from TeleRead Publisher David Rothman’s Fire.

I am going to go step by step here and explain things as clearly as I can. On both my plain-Android and my iOS tablets, I have a Kindle app. It has two tabs, one for ‘device’ and one for ‘cloud.’ Anything you download from your cloud—including personal documents—will be listed as on your device once you have put it there. It has to be listed this way, as it’s one app. There is nowhere else to put things!

On Amazon’s own tablet, they have split the Kindle books and the personal documents into two apps. In the ‘books’ app, you can view and organize your Kindle books. In the ‘docs’ app, you can view and organize everything else. You read everything using the same infrastructure, and you can access highlighting, synchronizing and all the same features for either content. But they stay forever segregated in their own little apps and never mix together.

Let me walk you though the menu bar in the books app.There are three buttons on the right-hand side of the menu bar: store, Goodreads, and font adjustment. And there is a button on the left-hand corner which takes you to either the storefront or the library. This library will only list your Amazon books.

I went looking for where the personal documents might be hidden. There are two menu choices above the book listing, for ‘downloaded’ or ‘all.’ Again, I only found my Amazon-purchased books. Even the books I had emailed using the ‘send to Kindle’ function weren’t there. So where had Amazon put them?

Enter the ‘Docs’ app. The three little icons on top allow you to select, sort or add. The left-most menu button lets you browse the local storage. But what about your ‘personal document’ books?

They are there, in a potentially confusing three places. Here is what the three tabs do:

Send to Kindle. This is a list of documents in your cloud drive which can be sent to the Kindle. You can email them to your Kindle devices from here, delete them, add them to a collection or download them to your device. If you interact with a document from this tab, it will synchronize with your other devices as a Kindle book would. Tap on it, and you can read it in the Books app. But when you go back out to your ‘book library’ it will not be there. You have to come back into this app to see it and interact with it.

Cloud Drive. This is a list of everything in your cloud drive—personal documents as well as other things. I was confused at first as to why this tab was here, since the books are all listed in the Send to Kindle tab, too, but with added functionality. Then I realized that not all of you are living in the Hinterlands of Canada where Amazon is pretty much only for books, and some of you may have music or movies or other things saved to your cloud. Here they will be!

Local Storage. This is anything from your cloud that you downloaded to access locally. If you tap on it a second time, it will show you folders. Here, you can see that the ‘books’ folder is empty—but seven things are listed in the ‘documents’ folder. When I open that up and select one, the only options are to delete it or email it. No way to get it into the ‘books’ folder, where presumably it will be sent to the Kindle app.

Now you see it—now you don’t

A few discoveries I made in my investigations:

1. If you add a personal document to a collection, you can view it with your Kindle books in the Kindle app if you browse by collections. But when you return to browsing your library by title, it won’t be listed there. Now you see it, now you don’t.

2. I you open a book using the Cloud drive tab instead of the Send to Kindle tab, it will be readable, but it won’t synchronize. I was dismayed to find myself back at the beginning of a book I was midway through, and it turned out this was my mistake.

3. I suspect that if I got those documents into the ‘books’ folder, they may be treated differently by the Kindle app. But I couldn’t figure out how to do that given the options which were available in the pre-installed apps. Perhaps a more robust file manager app could tweak this for me. But it is not do-able out of the box.

4. I tried to download the plain old Kindle app for regular Android, from some internet sources. When I tried to install it, it treated the app like an ‘update’ and not a new app, concluded that it was an older version of the app I had already, and refused to install it.

I get why Amazon is doing this. This Fire tablet is their entry-level content consumption device. If you behave as they want you to and only buy their books, there is no problem. Read in the Books app, and all is well.

But Amazon, for me, came too late. I already had a huge library of books from other sources by the time they rolled into Canada, and I want to keep using them. So I find myself very annoyed by this move. Who has the energy to keep track of which books belong to which app? As I told the Beloved, it would be as if they reorganized the Baseball Hall of Fame so that all the exhibits were put into separate buildings based on the players’ countries of origin. Who would browse that way?

I am still experimenting with my new toy, and hope to have further updates on this issue as I try some new tricks to try and get around this. But right out of the box, with no advanced tweaks? The Fire tablet is a reader fail.

(Time stamp changed to increase the readership of the above.)