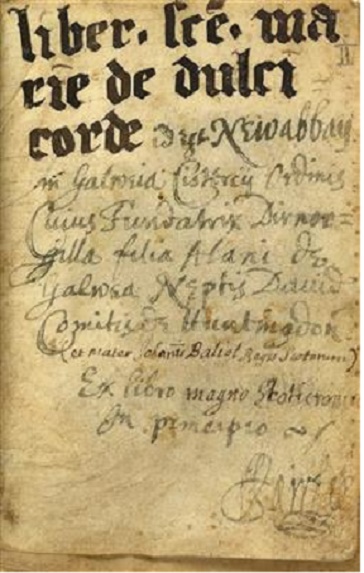 The National Library of Scotland has just announced what it calls its most important medieval acquisition in the past 30 years: The Sweetheart Breviary, originally penned in Sweetheart Abbey in the 14th century. “It is an extremely rare example of a medieval religious manuscript which was both written and used in Scotland,” states the NLS announcement. “Unlike many remaining Scottish liturgical manuscripts, which exist as fragments only, the Sweetheart Breviary is an entire volume in a remarkably good condition. It consists of 200 vellum leaves, and contains the text for many of the monastic prayers used each year in medieval Scotland.”

Lost from 1705 until its recent appearance in a Viennese auction house, the Sweetheart Breviary fetched $63,000 at auction, compared to its $7,900 opening valuation. It owes its name to the Abbey’s foundress, Dervorgilla de Balliol, “mother of the Scottish king John Balliol,” who established Sweetheart Abbey in 1273 “in memory of her husband John de Balliol. On her death in 1290, she was laid to rest next to her husband’s embalmed heart and the abbey was named in her memory.” According to the NLS, “the first leaf of the manuscript bears a large inscription [see picture above] in a medieval hand: ‘Liber sanctae Mariae de dulci corde'(a book of St. Mary of Sweetheart).”

“We are delighted to have made this significant addition to the national collection. It is a rare survival that will shed new light on our collective past,” said National Librarian Dr John Scally.