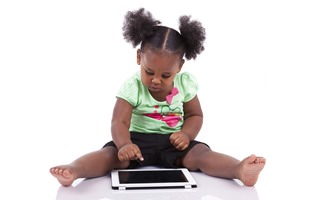 Do tablets and toddlers mix? It’s a question that has been much on the minds of parents as touchscreens grow more ubiquitous. The conventional wisdom has been no—that exposing kids to screens too early can disrupt their proper development. However, there actually hasn’t been all that much research done on tablet use in early childhood, partly because tablets have been changing so quickly that any multi-year research project has the potential to be obsolete by the time it is completed.

But some researchers have begun looking into the matter, and Ars Technica has an interesting article looking at whether early-childhood tablet use is bad or could have some potential benefits.

The key seems to be contingency—the way that children’s actions make things on the screen change. Children love that. It seems to be an important key to teaching them things, and to averting the harm that simply passively observing a screen can do. But it should be something parents and kids do together, not a way to keep them busy while you do other things.

Ideally, educational apps should also be a language-rich experience that includes other people in their environment. Children learn much better when working with a caregiver, someone who can answer questions and provide feedback about whatever is happening on-screen. A tablet should thus be used as a tool to increase interaction with your kid instead of a replacement for interaction.

Tablet applications should also be focused on whatever it is to be learned, avoiding distractions that might be cute but might also get in the way of the overall learning experience. They should also not be used as a “digital pacifier,” a way of getting kids to stop crying in public, because that could interfere with kids developing the ability to regulate their own behavior. However, using them to occupy kids so they don’t get fussy could be all right.

Given how ubiquitous they’re becoming, the question now seems to be not so much whether kids are exposed to touchscreens, but how they are. The article suggests parents should be thinking about ways to do it, and not feel guilty about the necessity.

Whether you like it or not and whether science can catch up, we have entered the touchscreen era and there’s no turning back. “It is impractical to never expose kids to screens. To discourage all screen use is almost a way of ‘parent shaming,’” [Human Development and Family Studies professor Dr. Heather] Kirkorian says. “It’s much more empowering to give parents information on what sorts of screen media are most valuable and let parents decide for themselves, instead of just saying, ‘Don’t use it at all.’”

It used to be you just had to worry about what were the right toys and books to get for your kid. Life is so much more complicated now, isn’t it?