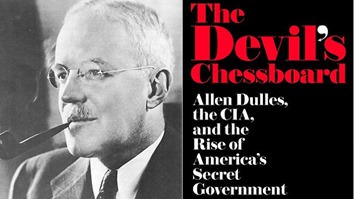 We’ll focus on just one book recommendation—The Devil’s Chessboard: Allen Dulles, the CIA, and the Rise of America’s Secret Government, from none other than a Murdoch-owned imprint, Harper.

In subject matter, The Devil’s Chessboard is not the most upbeat choice for the holidays, but you need to read it if you’ve automatically shrugged off the possibility that American bad guys (plural!) killed JFK. If friends and family can read this book, then so much the better. TeleRead Publisher David Rothman had dismissed the darker of the JFK assassination scenarios; he doesn’t now. Author David Talbot strengthens his case by showing what Allen Dulles, the late ex-CIA director, was up to in World War II. Not all the critics went for this one, but Talbot’s work earned best-book-of-the-month honors from Amazon and New York Magazine in October. Here is Kirkus’s thumbs-up. The Kindle edition costs a whopping $16.99, almost as much as the $18.44 hardback, 704 pages long; but the importance of the book transcends the issue of the price.

Now on to TeleRead-suggested gadgets. Many thanks to TeleRead Editor Chris Meadows, the primary contributor to this gift guide, along with Associate Editor Paul St John Mackintosh. Senior Writer Joanna Cabot also helped out, as did David Rothman. We’ve concentrated on products sold at Amazon, for the sake of simplicity and also because we’re an Amazon affiliate. But you’re certainly welcome to look elsewhere and use such tools as Google’s shopping site. Search there by price, since results will be otherwise be influenced by the compensation Google gets from merchants.

Here’s the caveat of the moment. Some of the bargains here may be out of stock now or very soon, so don’t tarry. Also remember that Amazon may tweak prices or show different ones to different customers, so it’s possible not every item we list will be priced the same as when we first spotted it.

When we started writing this guide, we wanted to be original and offer some less-commonly-known alternatives to the Kindle you could order, while still taking advantage of Amazon Prime’s two-day or next-day shipping. However, we ran into the problem that Amazon basically doesn’t have many other e-readers than Kindles. There are Kobo readers, but why buy a Kobo from Amazon? There’s a $30 6″ e-ink reader, but it’s gotten such terrible reviews we’d hesitate to recommend even buying it for yourself, let alone giving it as a gift to someone you like. If you’re going to buy someone an e-reader from Amazon, you’ll probably just want to go with one of the Kindles after all—which certainly isn’t a bad idea.

This one is tricky. What works for some won’t work for all, given all the variables, such as which carriers are available with the right frequency ranges. Paul, however, likes the Motorola Moto G (3rd Generation) – Black – 8 GB ($174). David is keen on the Huawei Ascend Mate2 4G 16GB Unlocked GSM LTE 6.1 Quad-Core Smartphone w/ 13MP Camera ($201)—he owns a similar model. Also consider other unlocked phones from Amazon.

We won’t get any affiliate-link rewards from it, but truth-driven as we are, how can we not mention that Wal-Mart has a $10 TracFone which we discussed earlier? It’s back in stock via the Wal-Mart web site.

Looking for a good, dependable Android tablet that can run the very latest version of Android but won’t break your bank? Check out Google’s second-generation (2013) Nexus 7. Where else can you get a 32 GB tablet (refurbished) for just $150? Unfortunately, the refurb isn’t eligible for Prime two-day shipping, but Amazon does have it in Prime-eligible new for $239. The 16 GB new version is  $148, and is Prime-eligible.

It is getting on in years, and Marshmallow will probably be the last iteration of Android to be available for it—but even if it runs a little more slowly these days, it’s still better-made and more dependable than any cheap Chinese OEM slate. Another possibility is  the Nvidia Shield K-1 8.0-Inch 16 GB Tablet ($199).

Or say that you want something cheaper, in the Chinese OEM tablet price range but made by a name brand. Here are some refurbished older tablets by Asus (which also made the Nexus) for $57 or $66, depending on whether you want the 8 or 16 GB version. Their resolution is 1024×600, the same as the $50 Fire’s, though their dual-core 1.2 GHz chips will be slower than the Fire’s quad-core 1.3 GHz. They may not be upgradeable to the latest version of Android, either—but the bright side is, they’re cheap and name-brand, and they will run plain-vanilla Android that’s not locked into anyone’s ecosystem right out of the box.

Accessories such as cases and keyboards

For a cheapie case for your $50 Fire (or $35 Fire if you swooped in during the Black Friday sale), one possibility is the $12 Fire 7 2015 Case , Exact [PRO Series] Professional Slim-Fit PU Leather Folio Case for Amazon Fire (5th Generation – 2015 release) Black. Or if you want something really rugged, you can follow David’s example and splurge $25 on a kid-proof/David-proof case (sorry—this one may not ship for more than a month but it’s worth the wait). Yep, half the price of the $50 tablet. But keep in mind that the case safeguards not just the tab but also the time that you or your gift recipient  put into customizing it. David also likes the Red Pepper cases for the 2012 and 2013 Kindle Paperwhites (double-check to make certain you’re buying for the right PW model). 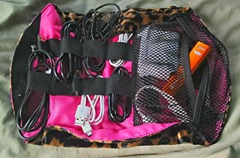 For carrying around odds and ends like power cords and power bricks, consider the Jansport Digital Burrito Pouch or the Jansport Digital Burrito Pouch Cheetah (alas, the latter is out of stock as we write this).  Chris Meadows mentioned the Digital Burrito Pouch in his post on backpacks for the modern digital lifestyle. The pouch updates the old idea of the toolkit roll—a leather or canvas sheet with tool loops that you’d roll up for portability—for the computer generation. This roll has loops for USB and other accessory cables, and a mesh pouch for tucking in wall-wart chargers, thumb drives, external battery packs, and other small bits and pieces that could get lost in a larger knapsack or bag. Chris has had his for a couple of months now, and was really surprised by how handy it’s turned out to be. “No more do I have to go fishing around for USB cables, or worry that my thumb drive will get lost in my large gadget bag,” he writes.

The one fault is that the elastic loops are kind of tiny. They work great for short USB cables, but not so well with longer ones. Chris would have liked a version with fewer, wider loops, or even just a couple of wider loops on one end. Even so, he says it’s still a great accessory for any portable gadget-user.

If you’re looking for a good Bluetooth keyboard to carry along with your tablet, check out this rechargeable one. Chris gave it a full review elsewhere on TeleRead, but suffice it to say that it’s inexpensive, sturdy, easy to type on, and made by a reliable brand. Plus, you don’t have to worry about replacing the batteries.