Update: See the most recent version of the LibraryCity post with mention of an unofficial Jan. 9 deadline and a link to the FCC’s easy comment form. You need to submit formally.

Please e-mail the FCC ASAP. The agency deals with accessibility matters and will soon make an important accessibility decision affecting Kindles along with other e-readers. Don’t delay!

For years, I’ve been publicly begging Amazon to stop muting its E Ink machines and restore text to speech in the future. I may even have been the first commentator to break the news about the Paperwhite’s lack of TTS.

This isn’t mere rhetoric. I sold my Voyage on eBay last month because—despite some improvements over the Paperwhite—it just hadn’t given me my $200’s worth without text to speech. I like to listen to books while exercising or driving. And what about the print-impaired? Read-aloud was in the Kindle 2 and some other models such as the Keyboard and the DX. Why did Amazon mute it? Don’t say, “Hey, the publishers selling human-narrated editions didn’t want it.” Amazon’s DRM lets them turn off TTS.

In addition, I’ve been pushing something else accessibility-related—an increase in the perceived contrast between background and text for those needing it. I’m among them. So are more than a few other baby boomers with aging eyes.

A friendly note arrived from one of Jeff Bezo’s assistants after I wrote jeff@amazon.com about the need for all-text bold or a slider or radio buttons to vary font weights. Kobo E Ink readers have sliders to tweak the weight and even the sharpness; see image below. Why can’t Amazon’s current Kindles? And if Kobo itself can add TTS, so much the better.

Below is my reply to the Bezos assistant’s reply. I mentioned the missing TTS, too, and in fact, I’ve made the read-aloud issue the main one.

My reply to Amazon’s reply 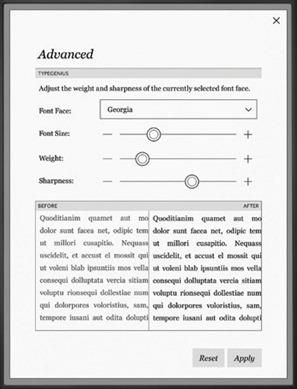 “Hi, Carly. Many thanks for your note. My wife shares the same first name, so maybe it’s a good omen that you responded—even if I am still hoping for an assurance that firmware updates in the near future can give Kindles and Fires the desired function of all-text bolding or variable font weights. The latter would be a better solution.

“I can’t see a downside. Yes, I know the Amazon philosophy of ‘Keep It Simple, Stupid.’ But even the people not interested in all-bold now might discover they wanted the feature, once it existed. This isn’t just an accessibility issue. With a greater perceived font weight, users would not have to crank up the brightness quite as much, and they would enjoy longer battery life with the Kindle’s front light on.

“As long as we’re in touch about accessibility, I’ll also bring up the failure of Amazon to include text to speech in the newer E Ink devices–not even the $200 Voyage. This is an unfortunate mistake in a number of ways.

“Hasn’t Amazon worked with the PTA to get Kindles into the hands of K-12 students and their families? Schools and libraries would prefer more accessibility, especially with Washington watching them. Amazon may see a market here, but it would be a bigger one with TTS, which, by the way, counts in the opinion of the CTO for the public schools here in Alexandria, VA (she and I were not discussing the Kindle in particular, but I’m sure she would say the same idea applied).

“Just as with the lack of all-text bolding, I suspect I know the main reason–in this case, marketers saying, “Oh, let’s segment things and encourage people to buy a Fire, too, not just an E Ink machine, if they want TTS.” But you know what? There are plenty of good reasons, such as the rich collection of videos for the Fire, to purchase both kinds of devices. Furthermore, while we’re on the topic of market segmentation, wouldn’t TTS be one more way to differentiate the Voyage from the much-cheaper Paperwhite.

“Even just a little lip for a headphone jack would be terrific. Imagine a Voyage with a TTS voice on par with Alexa’s in Echo. At least make it as good as Amy’s, one of the best of the Ivona voices.

“For once, I hope that common sense can prevail over marketer-think. I’d suggest that you and Jeff Bezos read a few of the zillions of customer complaints about the AWOL TTS. Among other things, commenters have said in the related forum that no one is paying attention to them except to screen out inappropriate material. Amazon depicts itself as super-customer-friendly; and here’s a chance to provide it. My own TTS thoughts, in the LibraryCity blog, are here and here.

“Needless to say, I hope you’ll share this note with Jeff B. Over the years I’ve bought thousands of dollars in e-books and devices; and, especially among the boomers, I’m confident that more than a few Amazon regulars like me would appreciate the requested features. Please ignore the marketers and anyone else challenging the need for these essentials. Amazon should pay less less attention to B school dogma and focus groups and more to actual customers. The best marketers and techies will look far beyond their personal needs and anticipate others’.

“Meanwhile, Carly, I’m going to say, ‘No,’ in response to the questionnaire asking whether you solved my problem. It is not your fault in the least. The rest is up to Jeff Bezos and the others working for him. Hey, I’ll think good thoughts. Remember how Amazon folks listened and came though with Instant Video for Android?

“Thanks and happiest of holidays,
”David Rothman”

How about it, Jeff? May the above be among your New Year’s resolutions! Given the accessibility issues and the related moral questions, you’ll feel better if you follow the suggestions here, and along the way you’ll boost your revenue and please shareholders along with customers.

Note: I’ve wondered in the past if the lack of TTS in the E Ink devices might be a deliberate way to pump up the sales of human-narrated books from Amazon’s Audible division. I’m not so sure now. Audio capabilities in Amazon’s future E Ink machines could open up a whole new market for Audible.

Furthermore, even TTS fans like me will on occasions pay extra for human-narrated books. Nothing can substitute for both the text and the “sound track” of A Fighting Chance, as read so passionately by Elizabeth Warren herself (conservatives are very welcome to feel the same about their own favorites).

What’s more, as a Kindle Chronicles interview suggests, the creative folks at Audible are looking ahead to new approaches to add value to audiobooks.

Update, 1 p.m., Jan. 2, 2015: Both before and after Jeff Bezo’s purchase of the Washington Post, the newspaper has never run an item about the Paperwhite’s lack of text to speech, as best I can determine from Googling the newspaper’s site. Ditto for mention of TTS’s absence in the new Voyage. I’ll not speculate on the reasons. On December 29, I called this LibraryCity post to the attention of technology reporter Hayley Tsukayama and asked if it was possible she could follow up. No reply so far. I’ll retransmit the email to her later this week. Based on the ubiquity of the Paperwhite and the many complaints of the absence of TTS, as well as on its importance to the accessibility community, this topic in my opinion is undeniably newsworthy. Haley, I  know you lead a busy life, writing so much of the tech section; but why not check out the lack of TTS? Even if it isn’t in the Paperwhite, it at least should be in the $200 Voyage.

Update, 1:20, Jan. 2, 2015: Via the FCC’s media relations office, I’ve queried Chair Thomas Wheeler on Kindle-related FCC issues. The agency in the past granted manufacturers a waiver, and on The Digital Reader site, you can find more background. In a posted dated Feb. 7, 2014, TDR blogger Nate Hoffelder says  the TTS waiver is a limited one and will be extended or expire Jan. 28, 2015. He notes there are other rules. Still, comment on this one would help. While it’s too late to make the official deadline, you should still write Rosaline Crawford at the FCC’s Consumer and Governmental Affairs Bureau. Her e-mail address is rosaline.crawford@fcc.gov. Let the FCC know how pathetic it would be for the waiver to apply even to a $200 machine.

“What is the current legal status of this matter?” I asked the FCC before running across Nate’s mention of the January 28th date. “Is there any chance that readers such as the Paperwhite and Voyage will need TTS in the future, under FCC requirements? While the manufacturers have raised price issues, the cost of a chip and headphone jack would be small. Furthermore, Amazon refuses to include TTS in the $200 Voyage E Ink device, hardly an economy machine. Does Chairman Wheeler have any thoughts on this issue? I’d also be curious if Mr. Wheeler would like to see a requirement for optional all-bolding or variable-weight fonts to increase perceived contrast—an issue especially of interest to some aging Americans with bad eyesight. Such features are in other machines like Kobo’s but not in the most common series of readers, the Kindles; and Amazon’s cost of adding them would be minuscule. Furthermore, note the all-bold capabilities of the Apple Web browser’s readability mode. The inclusion of a typeface optimized for people with dyslexia also would be a good for e-reader devices and could happen at minimal cost.”

I’m following up with an e-mail asking about the January 28 expiration; almost surely the decision has not been made yet. I do see that the FCC on Sept. 29, 2014, asked for comment on the waiver extension, with a comment deadline of Oct. 27, 2014, and a deadline of Nov. 14, 2014, for replies to comments. Here is an anti-extension letter that an Ohio woman wrote apparently in time for the related deadline. Given the scarcity of publicity on this matter—are you listening, Ms. Tsukayama?—it’s hardly surprising that the legalities of the TTS issue have escaped the public’s notice.

The above post is CC-licensed and appeared originally on the LibraryCity site.