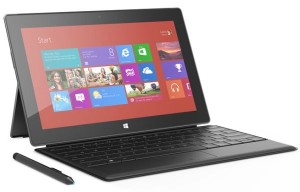 I called it earlier this month when I wrote about the temporary price cut on the Surface Pro tablets. I said I wouldn’t be surprised if the cut became permanent, and now it has.

Check out the All Things D article on the price cut. Their choice of image is priceless.

They are also reporting that the cut, which previously had been available only to customers in the U.S., Taiwan, Hong Kong, China and Canada, is now available in all markets where the Pro is sold. They are also offering a $40 discount on Touch Covers and a $50 discount on Surface RT bundles.

In my earlier article, I said I thought the iPad or a good 10-inch tablet was still a better buy, and I’ve not changed my mind. From price to app availability, I still think you can do better than a Microsoft product.

Let me close with this thought:

According to Microsoft, “People who buy Surface love Surface, and we’re eager for more people to get their hands on this incredible device.” If they love them so much, why aren’t they telling their friends, and getting their friends to buy one?