Ebooknewser has a post pondering the annoying region restrictions on many e-books, quoting from a Kindle forum discussion thread in which American customers vented frustration over not being able to order UK-only e-books for enjoyment on their Kindles.

I have never yet been able to determine why exactly it is the law. When I asked about it on vark a number of months ago, neither of the answers I got was satisfactory, but they both independently suggested that this must have grown out of case law—precedents set by judges’ prior decisions in court cases.

In the case of paper book, like any other good, the place where any activity is to take place is the place where the book presently is—i.e., the warehouse. In the case of the e-books, however, there is no warehouse—just a server. U.S. case law has pretty much dismissed the location of a server as a relevant consideration, since servers could be placed just about anywhere without the user/purchaser recognizing any difference.

It would be nice to know exactly how those laws came to be; perhaps it might lead to suggestions as to how to overturn them. If they could even be overturned.

We’ve had a number of spirited discussions on this issue in comment threads for articles over the last few months—this one in particular, which discussed the UK Publishers Association’s stance on the importance of territorial enforcement. Author/publisher advocates such as Frode Aleksandersen and Marilynn Byerly pointed out that stores ignoring territorial restrictions leads to loss of one-time advance fees for publishing in other territories, and the writer loses control over his work.

Of course, the flip side of that coin is that there are some authors (such as Paul Carr, who I mentioned just the other day) who can’t find American publishers for their works so can’t sell them over here even if they want to. (As I pointed out, this led to Carr giving away his previous work for free when he couldn’t find anyone who would sell it for him.) 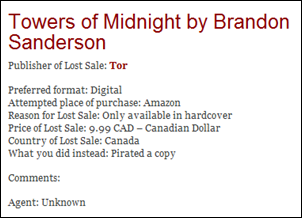 And meanwhile, there are sites like Jane Litte’s LostBookSales.com, where people can report e-books they would have bought if they were available—currently up to 1,173 lost sales tallied.

Whatever the cause of this obnoxious limitation, we’ve had e-books in some form for well over a decade now. Why on earth can’t the publishing industry figure out a way to solve this problem and let people who want to buy books buy them? As the pasted LostBookSales report indicates, people who are denied the opportunity will often just resort to piracy, and that does not earn the author or publisher anything.