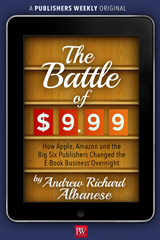 So, arguments wrapped up today in the Department of Justice’s anti-trust case against Apple. Juli Monroe has already done an excellent job of pulling out some slides from the Powerpoint shows and noting what the wavy lines on the charts mean. Over on Fortune, Philip Elmer-Dewitt covers the arguments in a more general sense, with a summary that is well worth reading.

There’s really not much point in reiterating the arguments in great detail here; Elmer-Dewitt does a good enough job, and really nothing new came out today that hasn’t been said over the last couple of weeks. (Also, there’s an even better source for digesting all the material that came out, but I’ll get to that in a bit.)

What it all comes down to is Apple claims it didn’t do anything wrong; it just negotiated the most favorable contract it could for itself, and the publishers, busy little bees that they were, did the rest. Apple couldn’t be blamed for what the publishers did, could it? The DoJ, on the other hand, says that Apple knew full well what it was doing at the outset—it was, essentially, creating conditions in which the publishers would have to impose agency pricing on everyone else out of sheer self-interest.

Now that all the arguments are out of the way, we just have to wait for Judge Cote to rule, which will probably take at least a couple of months. Cote famously said before even hearing any testimony that she felt fairly certain the DoJ would be able to make its case, but her lines of questioning during the testimony seem to suggest that viewpoint may have softened considerably. In a way, it really doesn’t matter much what she rules, because the losers are certain to appeal the case all the way to the Supreme Court—and it seems to pose some knotty enough legal questions that it seems highly likely SCOTUS will review it.

Is Agency Pricing Doomed In General?

Forbes is carrying an article by The Mergermarket Group’s Policy and Regulatory Report looking at what the implications of a DoJ win could be for other industries using agency pricing—which could be “any industry that sells digital content.” If agency pricing is deemed anti-competitive and hence no longer permitted, the thinking goes, it could harm smaller competitors who can’t hope to play in the same leagues as the big boys when it comes to discount pricing under the wholesale model.

I would quibble with the assumption that making consumers pay higher prices via agency pricing is the only possibly feasible way to get content creators paid, but that’s neither here nor there. As long as some people want content, and other people are willing to make content in return for money, they’ll be able to work out terms somehow. If more people are willing to pay, the price goes down. If fewer are willing, the price goes up. That’s basic economics. And the traditional publishers haven’t always done the best job at handling that content, anyway.

While I was reading up on sources for this article, I came across this Cory Doctorow piece on Boing Boing in which he plugged The Battle of $9.99: How Apple, Amazon, and the Big Six Publishers Changed the E-Book Business Overnight, a fairly short (Amazon calls it 58 pages; Apple calls it 31) $1.99 e-book by Andrew Albanese, his editor at Publishers Weekly. Albanese went through all the (publicly-available) testimony and evidence provided over the course of the hearing and distilled it into a cogent summary of events from start to finish.

Curious, I shelled out the two bucks and read through the book over the course of an hour. It was a quick and compelling read. Even though I already had heard most of the events from reading news coverage over the last couple of weeks, Albanese does a great job of putting them in context, and also explaining the e-book market conditions that led up to the publishers’ decision to impose agency pricing. It’s easily worth the money for anyone who wants a well-written in-depth explanation of exactly how and why the whole $9.99 pricing fuss got started, why the publishers hated it so, and what they tried to do about it.

If there’s one flaw in the book it’s that, save for a brief offhand mention of earlier entities such as Palm and the Rocket eBook, Albanese does not go into publishers’ treatment of e-books through the previous vendors such as Peanut Press and Fictionwise. I think it would have been a great chance to explore more of the publishers’ mindset pertaining to e-books, as John Siracusa did in this Ars Technica feature (which I first covered here) about his time with Peanut, and how that might have contributed to their head-on collision with Amazon over the matter of $9.99 pricing.

In fact, I would tend to recommend reading that Siracusa article as a companion piece and prelude to this book, as it does show the origins of publishers’ innate misunderstanding of e-books that eventually led to Amazon giving them such a wallop.

All of this is to say that the publishers effectively sabotaged the e-book market from day one. The DRM, the pricing, the general treatment as second-class citizens, it all added up to an insurmountable drag on a budding industry. Without some minimum level of buy-in from content owners, there was simply no way to break through to the mainstream, no way to ever sell enough copies of those popular novels to recoup a large up-front fee, and no way to persuade content owners to allow the most desirable best-sellers to be sold in e-book form.

You can see the echoes of this general publisher apathy in Albanese’s work, in which he notes that the publishers still didn’t seem to care much about e-books even when Amazon came along. When it came to the terms of their sale, they were largely content to apply the same wholesale principles as print books, even though there wasn’t actually a physical good to be wholesaled and retailed—and at least one publisher was remarkably candid about the reason for that:

“Part of the reason Penguin applied the same wholesale pricing model to e-books that it had for print,” the Penguin filing stated, “was because Penguin was not very focused on e-books
.”

Albanese quotes Amazon director Laura Porco’s testimony that publishers were mostly concerned about things like copyright and DRM, and less about money matters during negotiations for Kindle content:

“We spent considerably less time and energy negotiating financial terms with publishers. In fact, several of the largest trade publishers had publicly available e-book terms that we simply accepted.”

The publishers were also distracted by the Google Books scanning lawsuit and settlement, which Albanese calls “their formative experience with e-books before the Kindle”. (Everybody forgets about Peanut and Fictionwise—not surprising, since the publishers often did themselves!)

Another interesting thing: apparently the idea of agency pricing was first raised not by Apple, who had originally proposed a modified wholesale agreement, but by representatives from Hachette and HarperCollins. Apple soon latched onto it, though, obviously recognizing the benefit since it already ran its App Store that way.

The Problem with Agency Pricing

The problem with the pulbishers’ use of agency pricing was that it was effectively a prisoner’s dilemma. None of the publishers wanted to take the plunge without knowing it wouldn’t be diving alone—and their CEOs’ communication with each other, separately and via Apple, served to give them that assurance.

The publishers subsequently settled, not admitting any wrongdoing, and indeed getting fairly favorable settlement terms—even the money they have to pay out to e-book buyers will mostly come in the form of store credit, which means it will have essentially the same effect as a promotional discount sale and actually sell more of their books.

Apple, of course, has enough cash on hand that even a fairly hefty monetary settlement would be trivial pocket change. But some of the other settlement terms that publishers could live with—such as two years of DoJ oversight—would be nonstarters for mega-corporation Apple, so it had no choice but to fight it out in court.

Well, now the main part of the fighting is over, at least until the appeals kick in. Now we just have to wait with bated breath to see what Judge Cote decides after all. Will she side with the DoJ as she’d previously expected she would? Or has she gazed long enough into the golden Apple to change her mind? One thing’s for certain: it’s going to be very interesting to find out.