This Saturday, I drove about 30 miles west of Springfield to visit the Gay Parita Sinclair, a restored period filling station in Paris Springs, just west of Halltown, Missouri on old Route 66.

Several huge photo blow-ups of the place hang on the wall in the breakroom at TeleTech where I work, in keeping with the building’s “Route 66” decor theme. It was only last week when I googled it that I realized I had actually driven right past it without even noticing it twice while on my way to Carthage. I guess I’d mentally filed it as “just another gas station” without realizing. So as penance, this time I drove out there specifically to see the place.

While I was there I happened to notice, amid the shelves of period and Route 66 memorabilia, a couple of old Brownie cameras.

“I used to have that camera,” I said, pointing to the one on the right.

“You don’t look that old!” the lady who was showing me around (the daughter of the Sinclair’s owner) said.

And it’s true, I wasn’t that old. But the camera was. My first childhood camera, when I was very young, was a Kodak that shot on 127 film. I wish I remembered the exact name of the camera so I could google it; I’ve tried to find images of 127 film cameras online but none of them looked familiar. I think it must have been twenty years or so old even then, or ten at the least—it had that kind of late fifties, early sixties design sensibility to it. I didn’t have a flash so I could only take pictures outdoors, and my parents only bought me black and white film because color was more expensive. But I took a number of pictures, and had a number of pictures taken of me. (Yes, that’s a very little me at right. That’s how old I was when I first had that camera.)

My second was that Brownie Hawkeye, the same model as in the photo above. I no longer remember where it came from, whether it had belonged to my Dad when he was a kid or if he just found it in a second-hand store. Anyway, it took 620 film, and I used it until I dropped it and (alas) broke the lens.

It took great pictures, not least because it used film that was so much wider than the 35mm in common use in that day, and lots wider than the 110 that was the most common consumer pocket format. Hence, it didn’t lose as much quality being blown up to photo size. (And I thought it was delightfully novel using a camera whose viewfinder you actually looked down into rather than holding it up to your eye.)

So, my first picture-taking experiences were with then ten- to thirty-year-old camera equipment. You might think that film for such an obscure beastie would be hard to find. After all, if you want to record on an eight-track or reel-to-reel tape, or for that matter Digital Audio Tape or MiniDisc, you can’t exactly find it at the corner store.

And yet, the corner store was exactly where we got film. Because in those days, you could find a dozen different sizes of film anywhere film was sold, including right down at the local Wal-Mart—including the 620 film that worked in thirty-year-old cameras.

In our current digital world, it’s hard to conceive of any recording medium still being in use for that long. Just the different types of media used on computers alone could fill a page: 5.25” floppies, 3.5” floppies, Zip discs, Jaz discs, Bernoulli drives, CDs, DVDs, flash cards, jump drives. Even relatively “old” media, such as the humble hard drive, can be used in strange new ways—I recently discovered the Thermaltake docking station, which to my amazement allows me to plug and remove a full-sized SATA hard drive into a slot for all the world as if it were a Nintendo cartridge.

To say nothing of the file format changes over the years—for example, going from the multitude of word processors, each with its own individual format, to the eventual domination (and yet continued frequent revision) of the Word Document. Small wonder that digital files are giving archivists conniptions!

But back in those days, there were all sorts of different film formats that were still in use because people still had cameras that used them—different cameras specialized to different purposes.

The technology of film really hadn’t changed much since the introduction of Kodachrome; all the innovation was in new cameras, which could still make great use of old film. It wasn’t like razor blades, where they change the format of the blades every so often and gradually price the older ones out of availability just to make you shell out for entirely new razors.

(And it’s not like today’s e-book readers, either, where every manufacturer has its own format and DRM. Film was a commodity, and film sizes were standards. It didn’t matter if your camera was a Kodak but you bought Fuji film—it would all work just the same.)

127 film was commonly used for amateur photographers, and was also a favorite for gift shop slide sets. 110 fit into tiny plastic bricks that fit film, lens, flash, and battery into a device compact enough to fit in one’s pocket—the predecessor of today’s cell phone cameras, I suppose. (And disc cameras, which I’d forgotten entirely until researching this, were about equivalent I guess.) And there were a number of others, too.

I’m not entirely sure what killed off 127 and 620 film—Kodak stopped making them in 1995, well before the advent of consumer-level digital photography. (And well after I’d stopped taking photos with those cameras, which is why I never noticed when it happened.) Perhaps the rise of cheap fixed-focus 35mm cameras and the benefit to retailers of standardizing on one common format were what really did them in. 110 held out all the way until 2009. You can still buy these film sizes from specialty outlets (at higher prices than you used to pay), but the days of finding them in Wal-Marts are long, long gone.

I’m sure that if you asked a photographer back in the 1990s if computer cameras would ever replace film, I have little doubt they would have insisted that it was impossible, that you couldn’t replace the optical qualities of film with computer graphics any more than you could replace film with video cameras. (Perhaps they would even have waxed eloquent about the smell of the darkroom chemicals, I don’t know.)

And yet here we are, with every film format except for 35mm all but gone, photo developing counters disappearing from the stores where they used to hold sway (such as the K-Mart where I used to work), and even 35mm camera manufacturers starting to discontinue some of their landmark 35mm lines. (Even 35mm movie-making is starting to go by the wayside, with developers such as Robert Rodriguez extolling the virtues of digital.)

It doesn’t seem to be a question of each format having advantages over the other that keeps it around—while there are still millions of perfectly functional film cameras out there, people are giving them up in droves. Perhaps some 35mm and other professional film photography will always be around, but the hearts and minds of the consumers who make up the mass market have already been won over.

It’s really hard to predict what the future holds for books versus e-books. Even though they’ve been around in one format or another for twenty years or more, it’s only been in the last couple of years that they’ve developed any sort of momentum. We’re still at the beginning of the real e-book revolution, and for all the pontification and prognostication on both sides, there’s only going to be one way to find out what the future holds for e- and tree-books: Wait for it to get here. 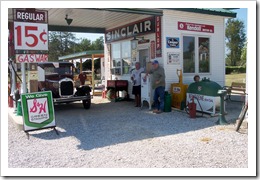 It’s funny to think that as we’re on the cusp of one digital revolution, I already had another one pass me by without even noticing it until glancing at an old camera took me back. In a way, both these revolutions were prefigured by the one that drew me out to where the camera was in the first place—old Route 66.

As shown in the Pixar movie Cars, the coming of the interstates brought a huge change to the way people travel the road. Was it an improvement? Well, it certainly gets more people from place to place faster (and cargo, too, leading to the near-obsolescence of another industry, the railroad). As to whether it helped overall quality of life, that might be arguable.

I guess what it comes down to is that new things replace old things all the time. You don’t have to look too far to find examples of that. This Techdirt piece talks about how Blockbuster (which is going to have to declare bankruptcy) was caught flat-footed by the success of Netflix—but Netflix is not resting on its laurels with the DVD-by-mail business model that killed Blockbuster, but already looking forward twenty years to when all movies stream digitally.

And it talks about how Kodak was caught flat-footed by the advance of digital photography, despite having ten years’ advance warning—bringing us full circle, I guess. The way that new innovations can drive out the old is called “creative destruction”—and while Techdirt applies it to business models there, I suppose it could apply just as readily to technologies.

It remains to be seen what it will mean for books.