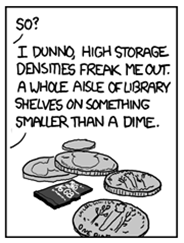 TechCrunch opens its review of the new Amazon Fire HD 8 by admitting that it’s silly to make such a big deal out of removable memory, but it actually is one of the most compelling features of Amazon’s new Fire tablet line—it can support up to a 128 GB SDXC memory card.

Just why is it so compelling? Perhaps because those cards slots have been so rare in some of the more popular Android tablets and smartphones. For example, my 2013 Nexus 7 has no SD card slot, nor does my Moto X smartphone. Even the new Pixel C doesn’t have an SD card slot.

Google’s philosophy was that it wanted to provide consumers with one big block of storage space within the device itself that people could use for anything they wanted, and avoid the ridiculousness of OEMs giving you all this SD card storage space that could effectively only be used for media while the main memory kept running out of space for apps and data.

And that was a great philosophy as far as it went, but it ran into the problem that people wanted even more storage space for media than the Nexus’s internal memory could provide. Of course, Google wanted to entice people into using its cloud services for that (as I do, myself; my entire music library lives on Google Play Music and intermingles with the selections available on Google’s monthly-fee music service), but not everyone wants to pay extra for that, and people often want media that stays available when they’re offline, too.

But the only way you’re going to get that with a Nexus is with a micro-USB SD card reader, or one of those double-headed micro-USB/regular USB thumb drives—and that’s a bit awkward for portable use, as if you’re holding the tablet and moving around you could always accidentally knock the thing loose by bumping into something.

Not everyone did that, of course. Barnes & Noble put a 64 GB micro-SD card reader in its Nook HD, for example—though the only thing I’ve ever used the one in mine for is reading the SD card that has the Cyanogenmod upgrades I used to root it into running regular Android. By the time I was seriously into Android, I had that Nexus 7 that was much better for media viewing, after all.

Like Barnes & Noble, Amazon is primarily a media business—books and e-books primarily, but also videos and music, which both tend to take up a lot of storage space. It’s worth noting that, as cheaply as Amazon built the Fire tablets in every other possible way, they did not skimp on the SD card slot. If you look at all the $50 Chinese OEM Android tablets out there that are as close as you can get to a Fire substitute, almost all of them only have 32 GB SDHC card slots. However, even the super-cheap $50 Fire has the full-fledged 128 GB SDXC slot—double what even the Nook HD could carry. That’s kind of like finding a Yugo with a Maserati’s engine under the hood, or at least a rich Corinthian leather interior.

As xkcd memorably points out, you can fit a whole library aisle full of books on a 16 GB micro-SD card—or many hours of audio, but just a few hours’ worth of high-definition video content. The general rule of thumb is 1 GB  per hour of video—so even the 16 GB card from the xkcd comic strip couldn’t hold that many movies or TV episodes. But a 64 or 128 GB card would be considerably more capacious.

So, from Amazon’s point of view, throwing that high-capacity card slot in there is a very smart move—it means that it can cheap out on the internal memory (the $50 Fire only has 5 GB user-accessible) but its customers can throw in as much external memory as they can afford to store as many e-books, movies, or music as they wanted. They could even get multiple chips and keep entire separate libraries on each one. (I have a 64 GB micro-SD waiting for my Fire to arrive this afternoon, myself.)

And one of Amazon’s innovations in its new Fire OS will be the ability to hybridize its cloud service with the extra storage space you add to your tablet, automatically downloading movie and television content to your available storage for viewing offline when you’re nowhere near Wi-Fi. (I understand it’s not part of the OS yet, but they’ll be adding it in a future update.) That’s something that’s really only possible when you can throw in much more memory at a whim.

Cueball’s “reverence [and] intimidation” toward SD cards is certainly understandable. It’s amazing how big and how cheap they are these days. That amount of storage space is a godsend for a tablet intended for media consumption. Even if you can’t put apps on it, it’ll still expand the capability of a Fire considerably to have one available.