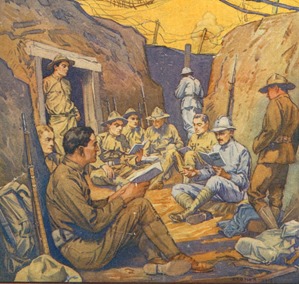 Is ePub 3, the latest version of the e-book industry format, worth it for small publishers? And just what features should the International Digital Publishing Forum emphasize as ePub evolves?

We’re talking about protracted trench warfare spanning years. The bigger players have the upper hand and almost surely will in the future, partly because they can write out the biggest checks to the IDPF. But for now, the battle still rages.

Take a look at Exploiting the Full Potential of the ePub3 Format, a Digital Book World post by Larry Bennett, an executive with a French technology company. But don’t just read the Bennett article. Go on to the comments.

Many small guys hate to see so much attention paid to embedded video and other fancy wrinkles.

“Readers simply don’t want multi-media and interactivity,” Mike Perry, owner of Inkling Books and a freqent TeleRead commenter, replies to Bennett. “When they read, they want to read. I saw this same ‘the future is in multi-media’ madness linked to CDs in the late 1980s when I was working for Microsoft. It bombed then. It is bombing now.

“Readers want to read,” Mike goes on. “They don’t want to bounce between reading and the equivalent of watching TV, listening a radio broadcast, and filling out an online form. They would like the better reading experience that ebooks could (but aren’t) providing. But they don’t want to abandon reading. At most, they might like ebooks to link through an external browser to two interviews of the author, one to be listened to before reading the book, the other for afterward. That’s all.”

Mike is right on the money in the case of typical novels and many and perhaps most other books at the moment. He is also correct in saying that the IDPF should worry more about making “ePub books do better than print at what print does. Graphics should display unobtrusively, not trigger dreadful page breaks. A book about Civil War battles, for instance, should have available at all times a series of maps that display how a battle is progressing, easily summoned or dismissed by the reader. The same is true of novels. Make including inexpensive line graphics easy and effective. They don’t cost a fortune to create…”

Ideally the IPDF will accommodate those and various other wishes of Mike, not just through standards by also by encouraging the development of appropriate creation tools for smaller publishers and self-publishers. The other day, we listed a bunch of apps, picked up from  David Kudler’s excellent post in The Book Designer. Even now, however, inexpensive tools will not do justice to ePub 3. And that is a shame even if most small publishers are not using multimedia at the moment. Here are some things to consider, building on a list in the Bennett essay:

1. In the future, multimedia won’t quite be such a hassle. Short term, I can well understand why Mike and most other small publishers are shunning it. Multimedia is costly to produce. But thanks to projects such as the Digital Public Library of America, it will be increasingly easy to find videos and audios in the public domain. And what about the thousands of video on YouTube and similar sites?

The challenge is to come up with the right tools to help the small guys easily discover just the right multimedia and easily integrate it with the books. Not all multimedia needs to be custom-produced.

Beyond that, hardware will catch up in areas such as CPU capacity and storage, and faster download speeds could help as well. Meanwhile, Mike is right to point out that authors and publishers can link to external sites. It’s just that self-contained multimedia can be more convenient for readers, especially those without good Net connections when they’re actually reading, as opposed to downloading.

2. With ePub 3, books can be more accessible. You can sync voice and text. A boost for children’s books, especially with so many English-as-a-second-language students here in the U.S.!

3. Although I don’t think unnecessary interactivity-related features should bloat creation tools for small commercial publishers, who says giant houses  like Pearson are ePub 3’s only beneficiaries? What about authors and publishers of free “open textbooks”? They, too, will come out ahead if they can easily create textbooks that let students take quizzes from inside textbooks. Beyond that, as noted in Point #1, multimedia could easily make more sense for small publishers in the future than it does now.

4. While fixed layout books are not for all—emphatically not for most recreational readers!— they could be very useful for reasons in some cases for aesthetic reasons or others, in areas such as art books and STM publishing.

Meanwhile I hope that ePub 3 advocates will not only escalate the war against Amazon’s proprietary formats, but also work on interoperability within the ePub world. Platform compatibility is a huge issue. “The main problem is that the market as it currently exists does not allow publishers to deliver the same enhanced product across all current digital platforms, whether it be Apple’s iPad, Amazon’s Kindle Fire, Barnes & Noble’s Nook, and Kobo’s Arc,” digital strategist Peter Costello has written. And then he goes on to make an incisive observation that format balkanization detracts from the value of books as a social medium.

“If publishers can’t widely distribute enhanced ebooks across all channels then they will simply never gain traction by word of mouth, reviews, or with promotions (and I mean ones that don’t require the necessary asterisk to explain in fine print that the iBooks version features this, the Kindle version features that, and the Google Play version features neither). Those in the trenches of day-to-day ebook development at Disney, HarperCollins, Workman, Wiley, S&S, Random House, DK, Atavist, and others know exactly what I’m talking about and are nodding their heads.”