Greetings all! I’ve been a TeleRead reader for three or four years now, and I’m thrilled to finally be a contributing writer for my favorite blog.

I’ve been reading e-books for close to 15 years now. My first “e-reader” was a Handspring Visor Deluxe (pictured at right). Anyone remember that sweet little device? 160 x 160 pixels of black-and-white goodness. Today, I just laugh when people ask, “Isn’t it hard to read on such a small screen?” when they see me reading on my iPhone. 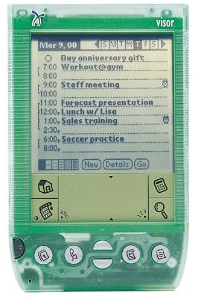 Peanut Press was my first e-book store. The closing of eReader.com was a sad day for me since it was the descendent of my first store. Incidentally, I never did figure out what peanuts had to do with e-books.

I was an early e-book pirate (though I’ve only downloaded, never uploaded). Before you pull out the slings and arrows, let me say that my first pirate site had perhaps 200 books. All Frank Herbert and Isaac Asimov era sci-fi. None of the books were commercially available, and there were no current bestsellers anywhere to be found on the site. Yes, we were single-handedly destroying the publishing industry. I haven’t pirated in years, ever since the books I wanted became available commercially. Honestly, I’m not even sure I know how to use a Torrent site to pirate an e-book.

I’ve read books on a series of Palm-powered devices, my last one being a Palm TX (pictured below). I briefly read on a Blackberry Curve, but that wasn’t to my liking so I bought my first E Ink reader, a Sony PRS 505. I still miss that device, but the battery finally died.

Now I read on an iPad 2, an iPhone 4S, a Kindle Touch, and (since Saturday) a Nexus 7 tablet. I like them all for different reasons, although with the advent of the Nexus 7’s pretty screen, I’ll probably scale back reading on the iPad.

In addition to being an e-book geek, I run my own business in the Washington, D.C., area. I’m a networking and social media coach, and I help my clients build more effective business relationships to generate more referrals.

I’m an author, both self- and traditionally-published. The Enthusiastic Networker was published by Crispin Books in November of 2011. Crispin holds only the book’s paper rights. I retained the e-rights, and the e-book version is for sale on Amazon, Barnes & Noble and Kobo. Now that Smashwords is accepting EPUB uploads, I’ll be putting it up there also, which will get me into iBooks!

My fiction is self-published. The Case of the Haunted Vampire was published on Amazon in December 2011. It’s also on Barnes & Noble and Kobo. The sequel, The Case of the Werewolf Puppy, will be published soon, hopefully next month. I intend to write some posts about e-book formatting and publishing. It’s not exactly hard, but there are some challenges if you do most of it yourself, as I have.

That’s me. I love writing how-to and troubleshooting posts, so don’t hesitate to contact me with questions. If I don’t know the answer, I probably know who to ask. I’m easy to reach on Twitter: @1to1Discovery