Scottish novelist Ewan Morrison has just done an epic-length dissection of one of the more celebrated peculiarities of the Caledonian mind in the UK’s The Guardian – and one whose iconic fictional prototypes are available online as free ebooks. That is, the fact that it’s two minds – or rather, a deeply divided and mutually antagonistic split personality. This personality disorder has been dubbed the “Caledonian Antisyzygy” – a coinage so clumsy and rebarbative that only a gritty, craggy, canny, calculating Scottish academic mind could have hatched it. And the classic incarnation (or incarnations) of this state of mind/minds is Robert Louis Stevenson‘s “Strange Case of Dr Jekyll and Mr Hyde” – long available on Project Gutenberg and elsewhere for free.

Coined by critic George Gregory Smith in the essay “Two Moods” in his “Scottish Literature: Character and Influence” (also available for free from Archive.org), the term describes: “the contrasts which the Scot shows at every turn, in his political and ecclesiastical history, in his polemical restlessness, in his adaptability.” Smith declared: “the Scot presents two aspects which appear contradictory,” one being a down-to-earth, matter-of-fact realism, often shown in “the piling up of details,” and the other being “a whimsical delight … in the horns of elfland and the voices of the mountains” as well as a “delight in the grotesque and uncanny.” Dour, calculating, Protestant, Anglophone Lowlander versus fierce, fantastical, Catholic, Gaelic Highlander. And the two natures feud in literature as bitterly as they did at Glencoe, goes the thesis.

Sir Walter Scott adorned many of his Waverley novels with strongly contrasted heroines:  the prudent, obedient, sensible blondes, who mostly are on the side of the status quo; and the wild, romantic, and often Jacobite brunettes. James Hogg, the self-taught so-called “Ettrick Shepherd,” gave Stevenson his early model in this school with his best-known work, “The Private Memoirs and Confessions of a Justified Sinner,” which puts Calvinist theology in the weirdest light while ringing the changes on duality and mutual antagonism in trope after trope: feuding brothers, doppelgangers, doubles, haunting shadows, split narratives. Stevenson revisited the theme in “Dr Jekyll and Mr Hyde,” “Kidnapped” – with its powerful dichotomy of Lowland perfidy versus Highland Jacobite steadfastness – and above all in “The Master of Ballantrae,” where he rammed home the political angle with the tale of two brothers, assigned opposite sides in the Forty-Five to preserve the family fortunes whatever the outcome, whose warped interdependence becomes more poignant and disturbing even than Dr Jekyll and Mr Hyde. The thoughtful, careful, “good” brother cannot escape the shadow of the dark but charismatic “Master,” and dies on his death.

And Scottish writers have been exploring and bemoaning this internal division ever since. Ewan Morrison equates it with borderline personality disorder, citing Scotland’s horribly high levels of substance abuse, destructive violence and suicide. Look on the bright side, though: It gave the nation some superb literature and unforgettable stories. And what smaller nation alongside a larger one is not going to develop a high awareness of conflicted difference, separateness, and the struggle to define yourself? 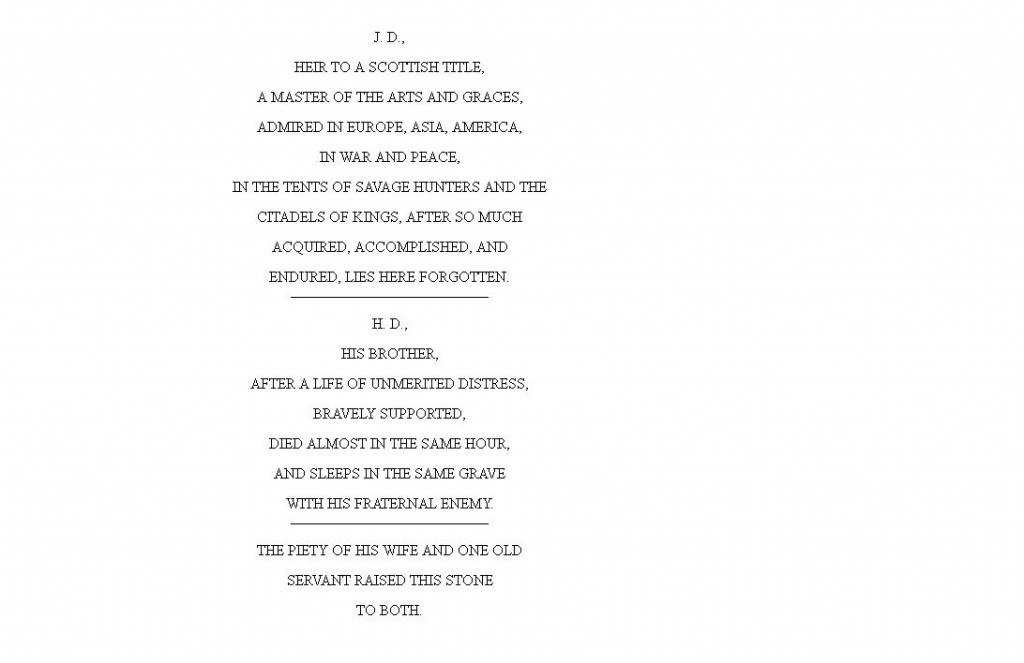