I’ve lately covered the legal situation surrounding the Augmentative and Alternative Communication (AAC) iPad app Speak For Yourself, which is the subject of patent litigation from larger AAC companies. Concerned parent Dana Nieder, whose 4-year-old nonverbal child Maya uses the app, has blogged several times about the difficulties the lawsuit has caused, including the removal of the app from the iTunes store, and its possible future nonfunctionality, due to legal pressure by the patent holders. Up to this point, she and her family have largely been legal bystanders in the case.

However, she now reports that her daughter Maya, another 4-year-old boy, and a 12-year-old girl who all find the Speak For Yourself app much easier to use and better for their purposes than the devices produced by these companies have filed a request to intervene and make themselves heard in court on the importance of the issue.

The filing notes that the interests of users of the app may not directly coincide with those of the defendant, the software company who makes the app—the defendant might choose to cease all production of the program as part of a settlement, which would deprive them of their voices as surely as if the defendant had lost.

While it’s unclear how much credence the court will assign the actual testimony of children as young as 4, it nonetheless does put a human face on the people who would be harmed if the software company was shut down—children using an application that fills a niche the plaintiffs’ devices do not adequately cover. Hopefully their appearance will help the software’s cause.

While AAC apps are not directly related to e-books themselves, they are nonetheless a similar new way of using the same sort of technology to make communication easier—like a very specialized “word processor” in the most literal sense. It’s troubling that corporations can assert patent rights over allowing people to tap words on a screen to have them said aloud. 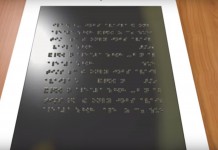