Tor has just announced it will be using BitLit to make DRM-free e-books of TorForge titles available at a discount to people who can prove they own the physical version of the book. It joins HarperCollins, which began using the program last year.

BitLit is an iOS or Android smartphone app that allows readers who can prove they own a physical copy of a book to buy the e-book version at a discounted price. It works by taking “shelfies”—shelf-by-shelf photos of your bookshelves with the spines out—and then attempting to recognize which books you own. Once it’s matched one, you take a photo of the cover to verify it, then write your name indelibly on the copyright page and photograph that in order to buy the e-book at a discount. (In Tor’s case, the e-books will be priced at $2.99.)

I’ve played around with BitLit a little, though not seriously. At the time, it only correctly recognized one book on all of my shelves. (And then it didn’t recognize the cover, because I had a different edition from the picture the publisher had given them, but they were able to clear that up easily enough.) Now that Tor has joined in, it might just be time to scan those shelves again. 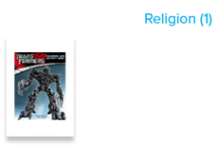