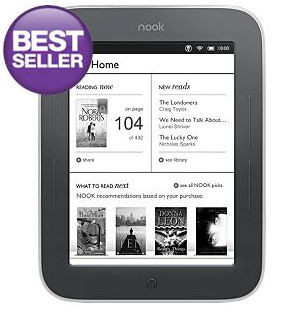 The news of Barnes & Noble sacking its CEO and discontinuing production of its Nook line of readers doesn’t seem yet to have dented appetites for the devices, with enthusiasts scouring retailers and online shopping sites for remaining examples.

Following a savage discounting round in the UK in May-June, the Nook Simple Touch has been one of the most sought-after items on the British hit list, retailing at around £29.00 ($43.20).

Proclaims one poster on the MobileRead.com Forums:

“Asda Direct have them stock with free delivery to a local store for £29 for anyone with an Asda store nearby who wants to save a few quid!”

Sure enough, Asda Direct is listing the Nook Simple Touch online as a best seller.

Disregarding the B&N ecosystem and the company’s own fortunes and future for a moment, the Nook Simple Touch still enjoys great esteem as a straightforward e-reading device, especially at this price point. PC Magazine gave it a 4.5 rating and an Editor’s Choice award as: “the best low-cost ebook reader you can buy.”

UK online stock level and comparison shopping site StockInformer.co.uk, referenced by the MobileRead.com posters, confirms Nook Simple Touches still available at £29.00 at UK chain stores Argos and Asda, as well as John Lewis. However, the John Lewis reference is for only one item, so eager buyers had better hurry.