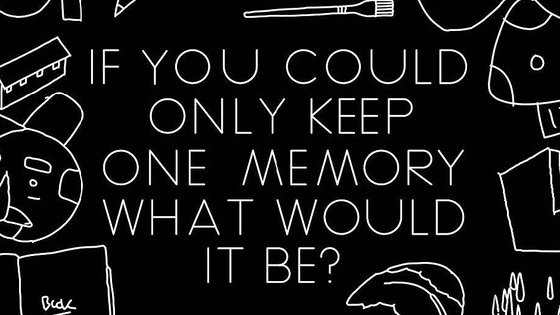 For anyone who worries ab0ut the possible future implications of the shift of our collective global written heritage from type to bytes, London’s venerable Victoria and Albert Museum of art and design has just the show for you. Memory Palace, an exhibition staged in partnership with Sky Arts Ignition, the cultural patronage group attached to the Sky Arts pay-TV channels of BSkyB, the UK digital TV and broadband unit of News Corporation, “brings together a new work of fiction by the author Hari Kunzru with 20 original commissions from leading graphic designers, illustrators and typographers to create a multidimensional story.”

“The way we read books is changing. Memory Palace explores how a story might be imagined in a different format—as a walk-in book,” as the exhibition’s introduction explains. “Hari Kunzru’s story is set in a future London, hundreds of years after the world’s information infrastructure was wiped out by an immense magnetic storm. Technology and knowledge have been lost, and a dark age prevails.”

The exhibition and its associated media, such as the Sky Arts/V&A app and website the Memory Bank, hinge on the art of memory, in a world where “books and any form of remembering, recording and mark-making are banned by the regime in power, eager to force humans to return to a state of unity with nature.” 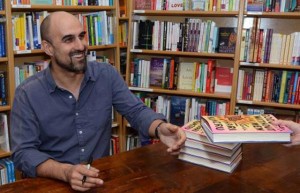 British Indian novelist Hari Kunzru has won the the Somerset Maugham award, the Betty Trask prize of the Society of Authors and a British Book Award. (He is also a former Sky TV presenter.) His prisoner protagonist in the story underlying the exhibition has turned his cell into a memory palace for perpetuating the past, clinging “to his belief that without memory, civilization is doomed.”

This is not the first UK show to explore the theme—in February, The Infocalypse Stack by Juneau Project showcased a similar exploration of  “how existing methods of artistic production might adapt or devolve in post-apocalyptic society. As they pointed out, Neal Stephenson developed the term infocalypse in his breakthrough novel “Snow Crash,” where the infocalyptic agent was a kind of conceptual virus that crashed human minds. But the artists of Memory Palace have used the theme for individual departures in very different styles, media, and levels of quality, from Mario Wagner’s collage depiction of “the massive magnetic storm that wiped the world’s information infrastructure,” to Jim Kay’s ornate reliquary to the memory of Charles Darwin. They are also extremely well-financed and publicized.

However diverse their strategies, though, the issue they tackle is a real one, and the obsolescence of e-books and their formats is a genuine concern. Literature and written culture are increasingly vulnerable not just to the kind of dystopian autocracy foreseen by Kunzru, but simply to technological change. In “The Shadow of the Torturer,” the first volume of Gene Wolfe’s marvelous “Book of the New Sun” with its frayed tapestry of a far future world under a dying sun, the world’s last and greatest library possesses a single thumb-sized crystal holding more volumes than the entire archive—which has long been lost somewhere in its shelves.

One other final irony is that Memory Palace’s backers Sky Arts Ignition and ultimately BSkyB would be among the first casualties of any infocalypse.