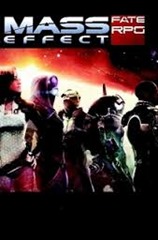 Over the last few days, ENWorld announced the list of ENnie Award nominees for 2015—the yearly role-playing-game-industry fan-based awards that are given out at Gen Con here in Indianapolis. This list of nominees included the Mass Effect role-playing game in three different categories: Best Electronic Book, Best Free Product, and Product of the Year.

Nicole Linroos of Green Ronin, publishers of the Dragon Age RPG, said in 2012 that although their relationship with Bioware is “pretty damn happy”, that the video game company was not interested in a Mass Effect roleplaying game. She writes, “the idea has been tossed around and discussed between the Mass Effect team, the Bioware licensing folks, and Green Ronin on more than one occasion. They’re not interested in taking Mass Effect to tabletop, it’s as simple as that.” In a more recent statement, she says that while she would love to have a legitimately licensed AGE-powered Mass Effect game, the company would is not allowed to do so, “not even for free, not even to “give back” to the community. In fact, doing so would likely endanger the legitimate license my company does hold from EA.”

Once this came out, ENWorld opted to disqualify the nominations and replace them with other contestants, as well as to implement a requirement for all future game entries that their submitters affirm they hold all the necessary rights or licenses.

Mappin held that he had written and posted the RPG as a free “labor of love” for people who wanted to be able to bring Commander Shepherd to their RPG tables, and had not been intended for commercial use. It had been posted temporarily on DriveThruRPG (though not by Mappin himself), then removed for copyright violation and hosted on Mappin’s own site, masseffectrpg.org, instead. In a comment posted to ENWorld’s forum, Mappin held that he had submitted Mass Effect to ENWorld “merely as an exercise to have it judged on its merits versus my peers.”

In another post, Mappin explained that he had followed the existing entry requirements for the ENnies:

I followed, to the best of my ability, the entry requirements for the ENnies, the Origins Awards, and the Golden Geek (Finalist in 2 categories). The statement that other publishers "who usually spend money getting their product into consideration for the awards" is somewhat meaningless as the ENnies have no entry fee requirement. As an electronic product, I only had to sub,it the PDF. I did, however, send a physical library copy as a courtesy. So I spent as much as any other "legitimate publisher" would. (I spent several hundreds of dollars of my own money to submit for the Origins, as a point of reference.)

And elsewhere, Mappin added, “The statement was made to me that the ENnies does not distinguish between fan and published works. I take that to mean, IP and licensing issues aside, that I was a valid final entrant for Product of the Year. So that’s something, I suppose. :)” As Mappin points out, self-publishing technology has now gotten good enough that the lines can easily blur between professional and self-published products.

Mappin hadn’t expected the uproar that ensued when the work was accepted for nomination and then it came out that it was completely unauthorized. He has since opted to remove the Mass Effect RPG files from his web site altogether, feeling that the game has now run its course.

Part of the problem seems to be the ENnies’ hybrid nature as an originally-fan-based award tha is nonetheless now corporate-sponsored and presented at the biggest yearly convention for the entire industry. A few years ago, allowing an unauthorized fan RPG supplement to scoop up three separate nominations for this fan-based award ceremony might not even have been considered worthy of mention. Now, though, there are too many eyes pointed in its direction.