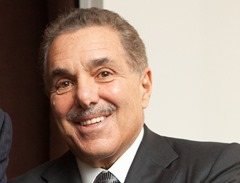 Leonard Riggio, founder, former CEO, and executive chairman of Barnes & Noble, Inc., has announced his retirement in September, the New York Times reports. It’s not exactly surprising at this point—he’s only a young 75, after all—and he doesn’t have a lot to do with the day-to-day running of B&N anymore since he stepped down as CEO in 2002. He will still keep a seat on the board, and 17.5% of Barnes & Noble’s stock, making him the largest single shareholder.

The New York Times article runs over Riggio’s history with the company, from buying a single fifth-avenue bookstore to building it into a nationwide chain, to getting vilified for “homogenizing bookselling,” to struggling in recent years as Amazon’s star rose and Barnes & Noble’s sank.

“We’re great booksellers; we know how to do that,’’ Mr. Riggio said. “We weren’t constituted to be a technology company.”

As the article notes, the chain’s heavy investment in the Nook and attempting to take on Amazon head-to-head proved disastrous, and Barnes & Noble is now on its third CEO in six years. Nonetheless, Riggio is optimistic about its future, as the chain “continues to cut losses from the Nook and experiments with a new store prototype.”

It’s a little sad that the Nook has become something to “cut losses from.” Though I’ve never used a hardware Nook (of the e-ink variety, at least—not counting the Nook HD tablet), my recent survey of the available e-reader apps shows a fairly decent, polished reading environment that could have been great—but Barnes & Noble just doesn’t seem to know how best to leverage it, while Amazon did. As Riggio said, B&N wasn’t constituted to be a technology company. And given how much space in the stores has been shifting away from books toward toys and other boutique goods, it may not be as much of a bookseller as it once was, either.

Still, Barnes & Noble seems in no immediate danger of going the way of Borders just yet. For all that it has problems, if it concentrates on its brick-and-mortar business it may well have the chance to pull it out. And perhaps it’s for the best that Riggio is stepping away—it may be that a younger generation is needed to steer Barnes & Noble through the hazards of the modern world. Hopefully Barnes & Noble can settle on one CEO who can lead the company through it.