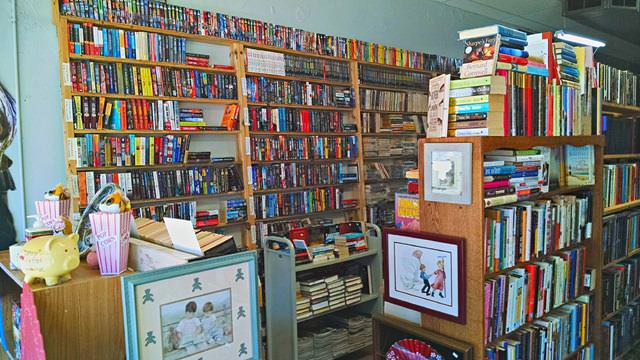 Oh look, it’s another story about how “used bookstores are making an unlikely comeback.” The article refers to this as “the age of Amazon,” which adds a little bit of extra amusement value given that the article is appearing in the Jeff Bezos-owned Washington Post.

The thrust of the article is about what you might expect; there have been any number of similar ones published over the last few months, based on used bookstores starting to flourish and some confusing statistical reports coming out. Rah rah, bookstores are making a comeback! People are reading all sorts of conclusions into this. Were e-books just a passing fad? Have people decided they don’t like reading off screens after all?

A lot of these stores discuss the importance of being a resource for their local community. One small bookstore chain operator explained, “It’s like having a museum or a theater. It’s a cultural center. It’s a place people want to go. And that’s why it’s a good investment.”

That is certainly an area where bookstores can compete with Amazon. Being an Internet-order outfit, Amazon isn’t any kind of a “local” resource at all. If you want to be around other like-minded book-lovers, a bookstore’s a great place to go. Of course, so is a public library—but the atmosphere is going to be considerably different at a public library. You have to be quiet, there’s usually only one copy of any given book available, and you do have to bring it back.

At the same time, a number of these used-book stores are adopting an “If you can’t beat ‘em, join ‘em” philosophy, and listing titles on Amazon’s third-party marketplace—a move which considerably broadens their potential customer base over just the people who come into their store. And they’re being shrewd about acquiring new inventory from downsizing baby boomers. (Not unlike those big book-reaping operations I mentioned in November and again today.) Another benefit is that they can eke out a considerable profit margin from acquiring books extremely cheaply and then marking them up for sale. As Nate Hoffelder notes at The Digital Reader, that’s a considerable advantage that kind of store has over bookstores like Barnes & Noble that are new-only.

Returning to what this resurgence actually means, I suspect that many pundits are letting their own prejudices and preferences interpret the events for them. In particular, people in traditional publishing want it to mean e-books are weakening, which means Amazon is weakening, so they’ve decided that’s what it does mean. I’m not so sure.

I wonder if it might have more to do with the e-book market suddenly reaching saturation. After several years of more and more people buying more and more e-readers and e-books, maybe just about everybody who would have wanted an e-reader has finally gotten their hands on one. (Especially now that they’ve gotten so cheap.) Maybe most people have finished re-buying all their favorite books as e-books. And certainly the Big Five’s agency-priced titles aren’t going to sell as well as when Amazon was able to lower their prices.

I also wonder how much of the sudden popularity of print books has to do with people reacting against the commonness of e-books these days. You can’t turn anywhere without seeing an e-reader, or someone reading e-books on their phone, after all. It might be enough to remind people how much they like reading paper, and it really would be a pity if it all went away—perhaps they’d better buy some up.

You saw the same phenomenon as CDs and digital music became popular, and suddenly hipsters everywhere realized how much better vinyl phonograph records sound. (While it is true that phonograph records do carry a fuller set of sound frequencies than a CD, you would need considerably more expensive hi-fi equipment than the average person has for the difference to be very significant. Unless you’re going to drop hundreds or thousands of dollars on stereo gear, you’re probably better off just going with CD.)

Chain record stores were entirely unable to take advantage of this, since they’d gone to all-CD shortly after CD’s release, so now the only record stores you find are mom-and-pop operations—not so different from the used bookstores that are also making a comeback. Vinyl isn’t any danger to digital music, but it did earn a respectable $221.8 million in the first half of 2015—about a tenth of digital music’s $2.3 billion over the same period.

A market that size probably isn’t big enough for chain record stores to survive on anyway—but there are alternatives. Columbia House just announced it’s restarting its old buy-at-least-one-a-month record club—you know, the buy so many records for a penny if you buy so many more at regular price deal that digital music sales effectively rendered obsolete? Only this time it’s going to sell vinyl records—the format that CDs rendered “obsolete.”

Anyway, the point is that older forms of media can have attractions that the very newest and latest form don’t have—even if part of that attraction is nostalgia. In fact, the more popular the new medium becomes, the bigger a “backlash” it can prompt in getting people to stock up on their favorites in the older format.

Of course, paper books are a lot more popular relative to e-books than vinyl is relative to CDs and digital. But then, the situations aren’t entirely analogous. While you need expensive equipment to get the best sound out of vinyl records, you need exactly the opposite for paper books—no equipment whatsoever, as opposed to a digital device for e-reading. That’s undoubtedly part of their appeal.

In the end, it’s interesting to see that paper books are making a comeback. And it’s good, too. Reading isn’t a zero-sum game. The more reading, in whatever format you like, the merrier. I only wonder how long this revival will last, and whether these new stores that are opening up will be sustainable. What if it’s just a fad and it blows over in another year or so?

I guess we’ll just have to wait and see.