So far everything we’ve written about a number of uses for a default Calibre installation. However, one of the best features of Calibre is the ability to customize the experience with plugins. There is a long list of third-party Calibre plugins, and there’s no way I could cover them all. However, I’ll demonstrate two of them in this article to give you an idea of what can be done.

By the way, plugins are what allow you to strip DRM quickly and easily. A Google search with relevant keywords will get you step-by-step instructions.

But today I’ll discuss a couple of completely legal plugins: Fanfiction Downloaded and ePub Merge, both of which work together to make downloading a series of stories easy. Calibre will even compile them into one book for you.

To begin, start up Calibre. (Of course, first you’ll have to install the plugins. And no, this doesn’t involve a Web search; Calibre makes it easy.) 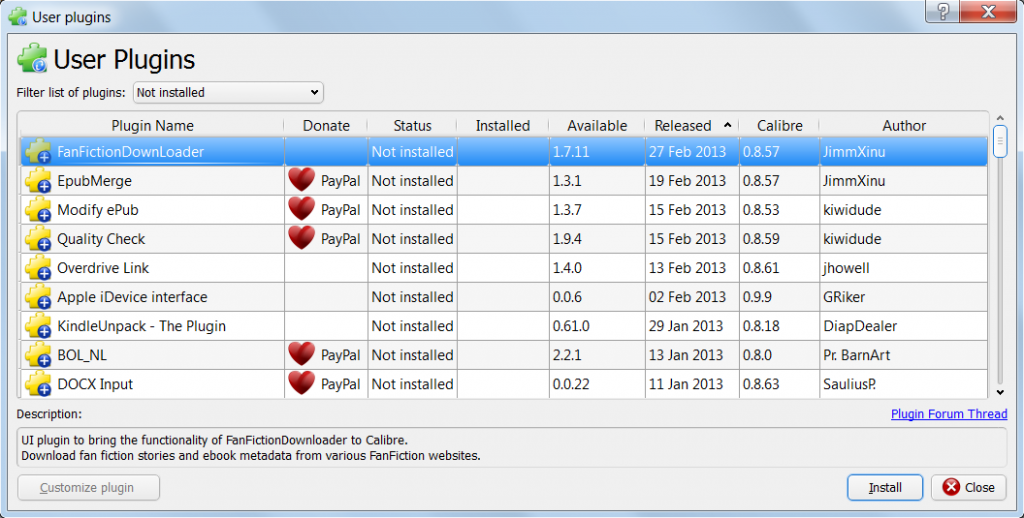 Scroll down and you’ll see plenty of available plugins. Select the one(s) you want and click “Install.” You will receive the following warning:

Any plugins you install from the list are considered trusted. Click “Yes,” and you’ll move on to the screen pictured below, asking you where you want your plugin button to appear on the menus. 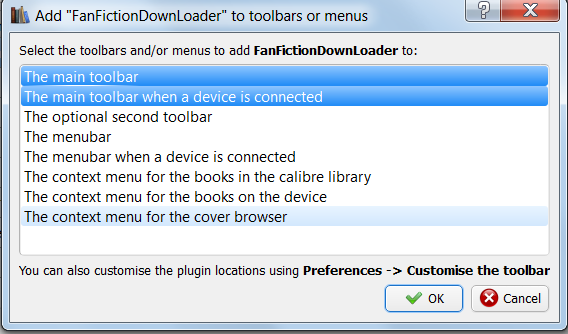 I just went with the recommended options. You’ll get one more warning:

If you are installing multiple plugins at one time, just click “OK” until you’ve installed them all. Then go ahead and restart.

Here are my new plugins on my menu bar:

FanFictionDownloader works best with EpubMerge, but you only have to run one of them to compile a series of stories in one book. The downloader plugin seamlessly integrates with EpubMerge to make it work in one pass. First, go find your story and copy the Series URL. I used a series from Archive of Our Own, but the plugin works with many other archives. Click on the FanFictionDownloader button, and you’ll get the following screen. Enter your URL.

Easy, isn’t it? I selected “For Anthology Epub,” and continued. Oops. “Adult warning.” Must be some explicit content in this story! Seriously, though, this is nice. Some “read it later” type apps don’t work properly with sites with adult warnings. Calibre handled it perfectly.

The plugin and Calibre crunched away, and moments later, I had my story. See how it even created a nested Table of Contents? Perfect for sending to my Kindle. The time until end of chapter feature should work well. 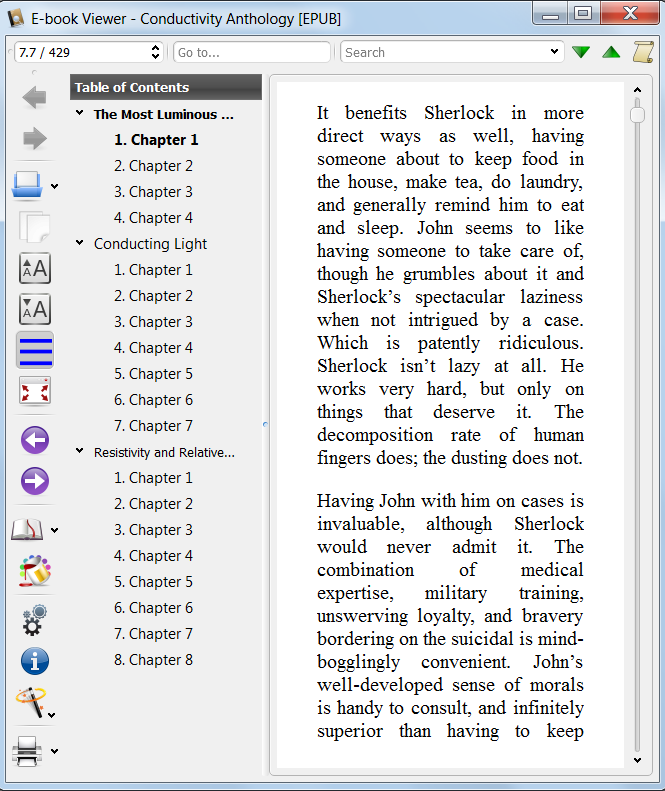 There. One very nice plugin that makes downloading fanfiction even easier than the method described in the previous article I wrote.

If there’s another plugin you’d like me to write about, just mention it in the comments. However, I can’t do much with the Kindle Collections plugin because it doesn’t work on my Kindle Touch. If there’s a big enough demand for it, however, I may be able to borrow a friend’s Touch.

And … that’s the end of the Calibre series—from me, anyway. (Joanna Cabot may have another chapter or two on the way, however, so keep your eyes peeled for those!)

I hope you’ve enjoyed the series thus far, and found it helpful. And if there’s anything you’d still like me to cover, just let me know. I’ve learned enough from writing this that I’d be delighted to add more articles.