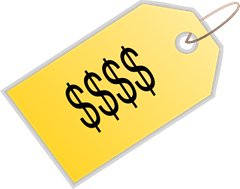 We know how much e-books cost. But what is their actual value? This is a question pondered in this post by writer and blogger Max Florschutz.

Florschutz is puzzled by the way e-books alone among digital media catch flak for being “too expensive.” He points out that no one complains that MP3s cost too much at 99 cents each, or that video games sold via Steam should be cheaper than the version that comes in a cardboard box. Why, then, are e-books so different?

Florschutz considers several possible reasons. Perhaps people value the material the book is printed on more than they do the actual content of the book. Perhaps the difficulty of obtaining a physical book compared to an e-book makes it more valuable in the eyes of people who do. Perhaps the “race to the bottom” in loss leader or low-cost self-published e-book pricing is affecting readers’ value perception. Or maybe some readers just feel entitled to get stuff cheap or even free.

In the end, he admits he can’t be sure of the real reason or reasons, and he doesn’t have any solutions to offer—but he feels this perception of lower value is harming books, and possibly the arts in general, so something should be done about it.

I do find a couple of faults with some of Florschutz’s contentions. For starters, he seems to forget that digital music is the price it is largely because people thought music should be cheaper. It all started with CDs costing $15 or $20 each, and college students getting so frustrated with it all that they invented Napster. Not too much later, Apple came out with iTunes and started selling songs for 99 cents each or most albums for $9.99 no matter how many songs they had on them. And that gradually became the accepted price for music.

As for Steam games, they frequently are cheaper than their physical counterpart, just because Steam runs considerably more sales than physical retailers ever do.

The funny thing is, Schutz himself might agree that a lot of e-books are too expensive. In one of the comments, he writes:

Oh, I’m still for keeping an ebook around paperback price—I honestly think that they’re going to mostly eat into the paperback market over the next decade or two. It’s more that so many people want an ebook to be $3, $2, $1, or even free that’s really out there.

For myself, I think paperback price for an e-book would probably be about right—or even a little less. Thanks to publishers’ insistence on DRM, you simply can’t do as much with an e-book as you can with a paper book, and there’s always the risk that the format itself could become defunct. (Unless you crack the DRM, at least.) But even then, I’m willing to shell out $15 to get access ahead of time to the Baen EARC of a book I absolutely have to read as soon as I can. (Though given that Baen doesn’t use DRM, it’s an easier decision that way.)