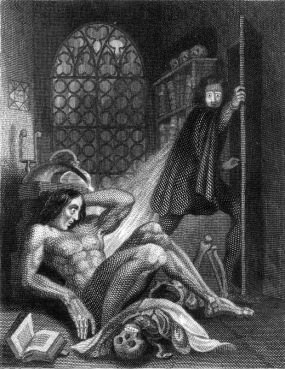 The scientist Victor Frankenstein created the eponymous monster in the Mary Shelley classic, but in a sense, the real father may have been a volcano.

Here’s part of the “why,” as explained in Tambora: The Eruption That Changed the World, a recent book from Gillen D’Arcy Wood, a professor of English at the University of Illinois. Tambora, a towering peak on a Pacific Island, lost a mile of height after the volcano erupted. Perhaps 100,000 people died in April 1815 when fiery lava streamed down the mountain. But as described in the Wood book and a New York Times article, that was just the start.

Twelve cubic miles from the mountain rose 25 miles above the earth in some cases. Huge masses of tiny particles traveled the planet, at least partly blocking the sunlight for months and months, even in places halfway around the world from the island. “Eighteen hundred and froze to death” was how New Englanders nicknamed the year 1816.

So, amid all the weird weather, how does Frankenstein enter the picture? Well, Mary Shelley and friends such as Lord Byron had gone to Switzerland expecting to climb mountains and otherwise do the usual tourist drill there. Instead the cold drove them inside, where they read ghost stories and decided to write their own. Here’s more from an old NPR story, based on a Frankenstein-related interview with Bill Phillips, a lit professor at the University of Barcelona:

Weather seems to show up on almost every page.

In one passage, Victor Frankenstein describes how he walked through a storm at night: "Vivid flashes of lightning dazzled my eyes, illuminating the lake, making it appear like a vast sheet of fire; then for an instant everything seemed of a pitchy darkness, until the eye recovered itself from the preceding flash."

Scenes like this one seem to have come from letters Shelley wrote about the weather she was experiencing at the time.

Here’s a letter to her sister: "One night we enjoyed a finer storm than I had ever before beheld. The lake was lit up — the pines on Jura made visible and all the scene illuminated for an instant, when a pitchy blackness succeeded, and the thunder came in frightful bursts over our heads amid the darkness."

But thunder wasn’t all. Frankenstein “invariably meets his creator at the topics of mounts, in icy caves,” Phillips said. “Then at the end of the novel, they go into the Artic Ocean and we’re led to believe they die as they drift off on an ice floe.”

Frankenstein wasn’t the only literary masterpiece to come from the vacationing Brits in Switzerland. All those shivers from the cold—not just from horror fantasies—may have inspired Lord Byron to write an outline for The Vampyre, as well as to pen a poem called Darkness. On top of that, the strange skies from the eruption just might have literally colored the works of landscape artists such as the great J.M.W. Turner. Might. Keep reading for one academic’s thoughts on this.

Now, of course, we have global warming. Just how might it shape the fiction of the future? Could today’s clifi SF be a precursor to mainstream fiction later on?

Another book of interest: The Year without Summer: 1816 and the Volcano that Darkened the World and Changed History.

Plus, some perspective from an online friend, Dr. Frances Chiu, an Oxford-educated specialist in gothic literature who teaches at the New School: “The Gothic as a new literary genre had been around for around 2 decades before the publication of Frankenstein while the vampire was just beginning to be resurrected in the late 1790s (e.g., Coleridge’s Christabel). So it would be hard to determine if either—as a tale of the supernatural—was directly inspired by the effects of Tambora. However, the element of coldness is striking in both: especially Frankenstein, with its partly arctic setting. Come to think of it, there is a wild storm scene in ‘The Vampyre’ while the vampire himself is described as having a cold eye." Meanwhile another lit prof friend, Dr. Roark Mulligan at Christopher Newport University, tells me: "Scholars make amazing connections, sometimes with the help of a little hyperbole. My favorite Turner painting is Rockets and Blue Lights (1840), completed long after the volcano. But even his earliest work Fisherman at Sea (1796), long before the volcano, has unique atmospheric qualities." OK, so there you go. Enjoy the fun theories—yes, I suspect at least something is there—but understand their limits.

Note: Links to the two books about the weather are Amazon affiliate links.

Correction: Double-checking, I discovered that Word’s searcher was not in a separate word mode. I’ve fixed the word occurrence statistics for Frankenstein. “Ice,” however, is still the winner among wintry words I searched for. 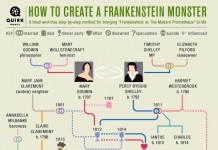