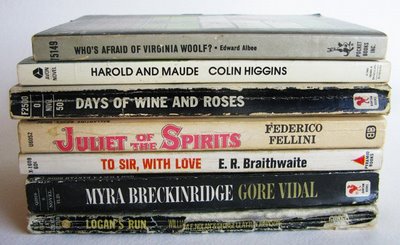 In the past few years, I’ve taught nonfiction writing to undergraduates and graduate students at Harvard, Yale, Bard, Pomona, Sarah Lawrence and Columbia’s Graduate School of Journalism. Each semester I hope, and fear, that I will have nothing to teach my students because they already know how to write. And each semester I discover, again, that they don’t.
* * *

Have reports of the paperback’s death been greatly exaggerated? (Slate)
In 2009, Penguin Group, one of the most successful publishers in the world, printed a charming history called The Book of Penguin, in the slim, orange paperback format that the company made famous in the mid-20th century.
* * *

40 Towns, An Experiment in Literary Journalism (The Millions)
Jeff Sharlet had a challenge for his creative nonfiction students at Dartmouth College. Sensing that journalism had become too “dull,” too mired in a “culture of professionalism” divided “between reporting and ‘storytelling,’” Sharlet asked his students who didn’t “know [any] better” to create a magazine of their own.
* * *

Bowing to demand, Provo library spends $50K for e-books (Daily Herald)
The Provo City Library is giving a $50,000 gift to its patrons. That is the amount library staff and the city council took out of the library’s emergency funds this month to purchase more than 3,000 e-books for library users to borrow digitally.
* * *