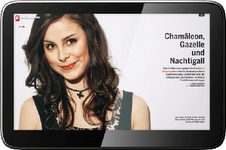 Editor’s Note: the following was sent to me by Ansgar Warner of Medienbüro Mitte in Germany. Many thanks! PB

Wasn’t it Edgar Allan Poe who used to say “My terror is not from Germany, but from the soul”? Judging from the potential threat the German WePad could pose to the iPad, Steve Jobs might as well put it vice versa. If not threatening, the tablet’s specs sound at least really promising. „Android. USBs. Camera. Multitasks. If I could buy the WePad in Germany in a week, it would replace my iPad for sure“ no one else than Jeff Jarvis twittered on, well, April 4th, just one day after i-Day. Now today has seen a sort of W-Day in Berlin. During a press conference Neofonie, the Berlin-based manufacturer of the tablet, disclosed further details on the WePad-launch. Pre-order begins on April 27th, just around the time the iPad will hit the shelves in Germany. The pricing scheme also seems like a low price blueprint of Cupertino strategies. The basic version with WLAN & 16 Gigabytes of memory will come at 449 Euros. Add another 120 Euros and you’ll end up with UMTS/3G, 32 Gigabytes, GPS & full-HD-Video. By subscribing to e-magazines or e-newspapers that can be read on the WePad, customers will be able to get an even cheaper, that’s to say subsidized tablet. At any rate both versions will feature two USB ports, a 1.3 Megabyte webcam and, of course, Adobe Flash.

„In making the Wepad we were very much concerned to give users, developers & media partners a barrier free environment“, declared Helmut Hoffer von Ankershoffen, CEO at Neofonie. Very true, if you look at the WePad’s app store. The tablet itself will run a linux-based OS, and apart from WePad apps in the narrow sense the store is said to contain applications for Adobe Air, Android, Java und Linux. However open in principle, one of the main purposes of the WePad is being a platform for paid content, not unlike the iPad. But still, many large publishing houses in Germany like Bertelsmann Media or Burda are reportedly very happy to reach their customers via the WePad, and by that keeping iPad, iPhone & Apples App Store out of the game. During today’s press conference, journalists witnessed a live show of Neofonie’s e-publishing-app WeMagazine, which was for the first time officially seen running on the device itself. Neofonie decided to show the e-mag-version of „Stern“, one of Germany’s most important „Illustrierten“, selling around 900.000 copies every week. The effect wasn’t wasted – as far as eye candy & performance is concerned, people seemed to like what they saw. Neofonie says the WePad will be publicly available in August. The remaining time is going to be used for building up the hype, beginning with a roadshow in May & a softlaunch in July.

Based on a blogpost for e-book-news from April 12th 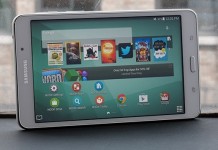