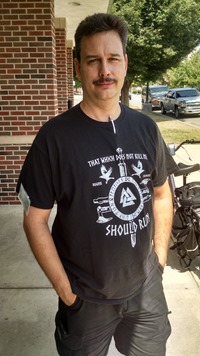 So, yesterday I went up to the local gun show so that a Sad Puppy could approach me bearing knives.

That is to say, yesterday I arranged to meet Michael Z. Williamson, Hugo-nominated author of Wisdom from My Internet, to pick up a couple of pocketknives I’d dropped off with him earlier. Williamson runs a knife dealership and sharpening service at the local gun and knife show, which is held at the Indiana State Fairgrounds in Indianapolis every couple of months. His prices are very reasonable, and I was very happy with how sharp the knives were when I got them back.

More importantly, Williamson is a terrific guy. I’ve never met him at any time that he’s been less than polite and friendly to me or to any other fans. And for that matter, so is Larry Correia, the ur-Sad Puppy himself—I met him at Gen Con last year, and he was kind enough to autograph a couple of books I’d gotten at the Baen panel. I also met Jim Butcher, briefly, and chatted with him for a few seconds about City of Heroes. Basically, every Sad Puppy I’ve ever met has been a friendly and reasonable human being in person.

For that matter, I follow Williamson, Correia, and a few other Sad Puppies such as Cedar Sanderson and Sarah Hoyt on Facebook. For the most part, we get along pretty well. I don’t charge into their comments to pick political fights with them, and they don’t do the same to me. I don’t always agree with everything they say, but I don’t feel the need to say so. (Usually, at least. It’s possible I may have disagreed with them to their face(book) a time or two, but so far none of them has blocked me yet. Fingers crossed.) Being polite to each other is a great way to get along.

I can’t say I’ve met too many of the more prominent people I’ve heard speak out against the Puppies—though I did get to talk at some length with George R.R. Martin a few years back, and he was a nice guy, too. And I interviewed Kameron Hurley briefly at Gen Con (I still need to post that episode of the podcast, come to think of it). So I’m pretty sure it applies equally to both sides.

I think that, over the last year or so, people on both sides have been so swept up in the drama surrounding the Hugos that they tend to forget that most of the people on the other side are ordinary, decent human beings in their own way, too. (I say “most” because I’m certainly not going to apply that definition to Vox Day and the other Rabids. But then, I haven’t met any of them in person, nor would I care to.) People disagree with the other side and look for fights to pick. When you step back and look at them, some of those fights are remarkably silly—on both sides.

We ought to try to stop that. I have little doubt that the Sad Puppies just wanted stories they liked to get more representation, and recommend that more people read them, the same as anyone who has favorite authors or stories they want to see on the ballot. Unfortunately, the way they went about doing that—and the way it left room for Vox Day to come in and stir the pot—got in the way of the desired end result.

I think both sides probably made some unfortunate tactical decisions in how they handled the 2015 Hugo Award matter, but the nice thing is, that award is behind us now, and the 2016 Hugos are a chance for us all to push the reset button. For her part, Kate Paulk, the leader of next year’s edition of the Sad Puppies movement, seems to have a more reasonable approach planned. On a podcast livestream, she stated (starting at 1:05:42):

For starters the word slate is not going to appear anywhere. For second [Cross talk] I am not doing a slate, I am doing a list of the most popular works in all of the various categories as submitted by people who read on any of the various blogs that will have me. And I’m going to post ultimately the top ten of each, with links to the full list of everything that everybody wanted to see nominated, and I’m going to be saying “hey if you really want to see your favorite authors nominated your best bet is to pick something of theirs from the most popular in the list as opposed to the least popular”. That is going to be what it is. I don’t care who ends up on that list. I don’t care if David Gerrold ends up being the top of the list somewhere. That’s not the point, the point is that I want to see the voting numbers both for nomination and for actual voting go up above 5,000 up above 10,000, because the more people who are involved and who are voting the harder it is for any faction including puppies to manipulate the results.

That’s a much better way to approach the matter than coming up with a slate with just a small number of candidates, the way Brad Torgersen did last year. As Paulk points out later in the livestream, Torgersen didn’t fill every category on the Sad Puppy slate with five candidates, but its having fewer than five left room for the Rabids to come in and piggyback on them by putting five on theirs. It also resulted in some candidates that Puppies might have nominated, such as the Heinlein biography, getting left out because Torgersen didn’t know about them to put them on the slate. Listing all suggested nominees will make a lot more sense.

More importantly, it’s also the way that a lot of other places make Hugo recommendations. That’s how John Scalzi’s “Fans Award Recommendation Threads” work, for example—people plug stories they personally think are worthy and recommend that others read them. And people have historically been fine with that kind of thing. There’s no attempt there to make a specific list of just a few works in each category. There are also people out there attempting to list and discuss every possible eligible work for 2016, so people will know what’s available.

Torgersen might have meant the 2015 slate as a list of recommendations for things people should read and then nominate if they liked them (though he wasn’t really very clear about that in the original announcement), but the problem with a list that has just a few candidates on it is that a lot of people will choose to nominate it as-is without actually bothering to read the works on it. They might not feel like they have the kind of time it would take to read everything, but that list is right there and it’s easy to copy and paste. Hopefully more people will be moved to nominate stuff they actually read this year.

(That being said, there’s no telling what Vox Day and the Rabid Puppies will do to try to mess things up. Hopefully enough 2015 members can be moved to take an active role in 2016 to minimize their effect. On the bright side, it should be less of an issue in 2017, if the new rules do manage to go into effect.)

As David Gerrold points out, we’re all fans here, and there should be room for everyone. I do hope there will be, and that we can have a more tranquil award season this time. I hope that we can dial back some of the hyperbole and hostility on both sides. I hope we can have less name-calling on both sides, too. At the least, I hope those opposed to Puppies can be a little clearer about differentiating between the Sads and the Rabids—and that the Sads can try a little harder to differentiate themselves.

Either way, every Sad Puppy I’ve met or follow on Facebook, and every non-Puppy too, has been a friendly and kind person—but it’s easy to forget that when people are just words on a screen. Maybe we should all try a little harder to keep that in mind.

(Note: Just to be clear, in the headline, I am using “fans” in the inclusionary sense. Authors are fans, too, or else they wouldn’t be authors.) 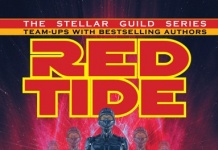