Next time you’re tempted to join a Boycott Amazon campaign, here’s something you might want to reflect on. An Amazon trade presentation, Tweeted by a conference attendee and spread first via Writer.ly then by an article in The Guardian, has declared that “A Quarter of top 100 on Amazon.com Indie-Published.” The overall message is clear: Amazon’s platform provides a way for the little guy or gurl to step around the big behemoths and reach the readers. 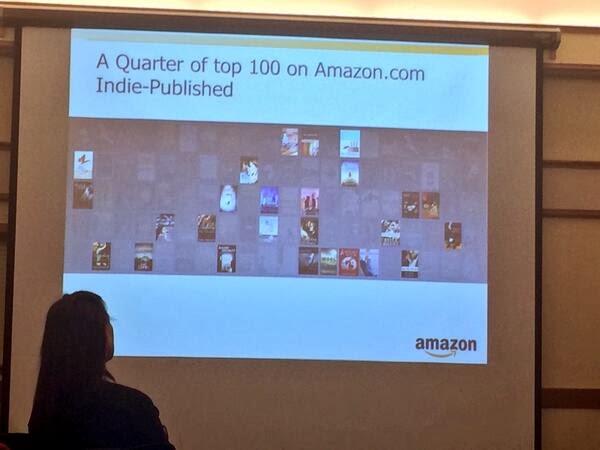 As quoted by The Guardian, an Amazon spokesperson confirmed that the statistic focused entirely on Kindle publications in 2012 that were self-published via Kindle Direct Publishing (KDP). The KDP platform does accommodate smaller presses too, but self-published individual authors were obviously holding up just as well in the rankings.

Clearly, self-published authors may not fare so well when it comes to the print book realm. But they still gain a commanding position in the ebook universe without any reference to Big Publishing at all. And Amazon, under fire for monopolistic activities and tax evasion in more markets than just the UK, may want to underline its support for little people to refurbish its public image. But there is no reason to doubt that those figures are true.

Elsewhere I did write that Big Publishing could still rebuild its dominance in the ebook arena with its marketing dollars and dedicated promotional teams, and push back against the self-publishing transformation. Now it looks like I might have to eat my words. The Amazon figures certainly suggest otherwise. It looks like indie/self-publishing is holding on to and even extending its market share, and above all in the critical bestseller area that the Big Five are supposed to devote their market development resources to unlocking in order to provide the stream of big sellers that they need to fund their bloated establishments.

This could also explain a lot about the recent push by the Big Five to develop alternative direct-to-reader ebook platforms of their own. Don’t tell me it’s an attempt to capture customer data. It’s a bid to win back sales from Amazon that they don’t dare to admit to yet.

So this is why Big Publishing hates Amazon. Amazon is eating their lunch in the critical sector that matters most to them. And if you see well-funded and well-supported campaigns around to boycott Amazon, perhaps you should wonder where the money behind them came from. And oh, by the way – if you join those campaigns, you’ll be destroying the livelihoods of struggling self-publishing authors. I hope you feel proud.