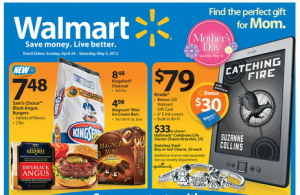 By now, many of you have probably heard the news that Wal-Mart Stores Inc. has chosen to stop carrying the Amazon Kindle. (“This includes all Amazon Kindle models current and recently announced,” according to a Wal-Mart spokesperson.)

The news seems to have broken sometime this morning, after a memo sent yesterday to Wal-Mart store managers came to light. According to Reuters, “a Wal-Mart spokeswoman confirmed the decision and said the company would continue to sell ‘a broad assortment’ of other tablets, eReaders and accessories.”

I don’t suppose it should come as a surprise that the statements Wal-Mart has released about the incident are so ridiculously vague. Take a look at the following statement, for instance, which was provided earlier today to a Washington Post reporter:

“Recently, Wal-Mart Stores Inc. made a business decision to not carry current Amazon products beyond our purchase commitments and existing inventory. Our customers trust us to provide a broad assortment of products at everyday low prices, and we approach every merchandising decision through this lens. We will continue to offer our customers a broad assortment of tablets, eReaders and accessories at a variety of great price points. This decision is consistent with our overall merchandising strategy.” 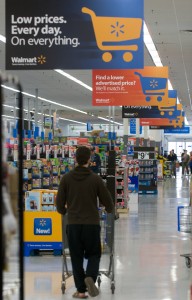 To be fair to the PR rep who wrote that statement, I don’t believe I’ve ever seen a more impressively constructed non-answer in my life. And yet this sort of thing just boggles my mind, because the real reason Wal-Mart has decided to stop carrying the Kindle is totally understandable: “Consumers who buy Kindle tablets such as the new Kindle Fire HD can shop on the devices for more than just digital books, pushing Amazon into heightened competition with stores,” as Reuters reporter Jessica Wohl writes.

In other words, regardless of the fact that it has no brick-and-mortar locations, Amazon is clearly being thought of by many Big Box industry execs as serious competition. Or as Caris & Company analyst Scott Tilghman says (also in the Reuters story):

Amazon wants to get its tablet into the hands of consumers and make it a cash register of sorts. The case could be made that if Wal-Mart and Target sell Kindle tablets, they are cannibalizing their own sales because Amazon aims to capture sales to consumers, be it ebooks or a long list of other items.

Target, by the way, stopped selling Kindles in its stores about five months ago.

For anyone who’s been eyeballing any of the devices in Amazon’s just-released line of Kindles, there could be a slight bit of good news here: Wal-Mart has announced that its stores will stop carrying the Kindles only “after inventory is depleted and pending orders are filled,” according to the aforementioned WaPo story. If I had to guess, I’d say a lot of Kindles will be going on sale at a lot of Wal-Mart stores across the country very soon. (Assuming they haven’t already, that is.)

The only Kindle items I was able to find online at walmart.com were accessories, such as case covers. But if any of you

happen to see discounted Kindles at a Wal-Mart store near you, we would be hugely appreciative if you’d take the time to post a quick note in the comments section below with any relevant details. (I’ll be heading to the South Philly Walmart Superstore later tonight, by the way; I’ll tweet a note @TeleRead if I come across anything good.)