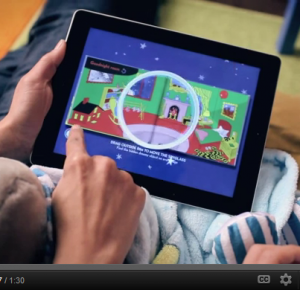 Goodnight Moon is a hugely popular children’s picture-book by Margaret Wise Brown and Clement Hurd ; it was recently made ‘interactive’ for the iPad. I’ve recently been having some weekly iPad time with our youngest kindergarten class, and thought they would be the perfect guinea pigs for this intriguing app.

The interactivity was about what I expected. You can have the app read you each page, and then the kids can press on individual words to hear them again, or tap on a magnifying glass, which they can use to zoom in on parts of the picture. Some elements of the picture animate or make little sounds when touched. There’s also a tiny control arrow that’ll read the page to you again. When you’re ready to continue, you can swipe to turn the page.

Usability: Better in Theory Than in Practice

There were a few difficulties with this setup. Firstly, the iPad recently debut ‘multitouch’ features that allow you to do things like flick between open apps using big hand gestures. If you’re an adult, this can be very handy. If you’re four years old, however, you might not have the fine motor skills yet to make a more precise swipe gesture. I spent most of the lesson running back and forth between kids who had lost the app while they were trying to turn the page.

There were also some controls which weren’t intuitive. The magnifying glass made no sense to them. They were ready to just poke at something on the page and see what happened. They didn’t need the artifice of clicking on the magnifying glass first. And other controls, like the arrow to repeat the narration, were too small for the kids to really notice or to use without supervision.

The Problem with Print Replication

I also think that in their effort to replicate the pages of the print book exactly, they sacrificed usability in some significant ways. The print was tiny, for instance—way too small for its intended kiddie audience to have much use for. The kids I worked with made no attempts to speak the words along with the read-aloud voice, even when we prompted them to press just one word and focus on that.

Their homeroom teacher also tried to get them to spot sight words such as ‘the’ and ‘a.’ She had no takers. The print was too small for them to really process it as anything useful, and it couldn’t be adjusted like it could be in an actual reading app. This app was about looking pretty—not about actually being useful in helping little children learning to read.

The text also wasn’t presented very well for maximum comprehension. In reading, teachers often use the word ‘chunking’ to refer to the process of grouping words together into usable sections. Because they were constrained by replicating the print pages, they didn’t chunk the words very well. A few times, sentences trailed off to continue on the next page, which meant that the kids had to either turn the page at once (to finish the thought) and therefore miss out on playing with the interactive stuff, or else succumb to the urge to go exploring and lose the thread of the story.

If the app’s publisher had worried less about how the paper book had been set up, they could have used bigger fonts, fewer words per page, and sentences that were grouped together. No, it wouldn’t have looked like an animated version of the paper book … but it would have been more meaningful for the children.

It’s a pretty app, and it got high reviews in the app store, but as a teacher, I have to give this app a fail. It struck me as very much what a marketing executive would think children would want to do, not as something they would actually want to do themselves. I’ve seen these kids engage with other learning apps and have much better engagement and interest than what I saw with this one.

One app the kids use in senior kindergarten focuses on letter sounds. You’ll get a picture of a cat, for instance, and three large boxes, with space for a letter in each. The C and the T will be filled in already. The middle box will be empty, and you’ll get a choice of letters to place inside it. When the kids touch each letter, the computer sounds it out for them. When they drag in the correct answer, there is a clapping sound effect, little fireworks go off around it, and the cat animates. The kids are usually highly motivated to continue because they want to hear the clapping again and be proud.

Compare that to this Goodnight Moon app. It has the same elements (a computer that sounds out the words; animations the kids can interact with; words they can read) but there’s no clear task. There’s no immediate feedback—no motivation to continue to the next part, so that you can get more. The kids’ attention started wandering before the animated voice had even finished reading the page.

This might be OK to read with your kids at home just for fun, but as a learning app, it disappointed me. The controls were fiddly and difficult for the kids to use independently, and the effort to be faithful to the paper version came at the expense of maximum usability.

I love Goodnight Moon as a book. But as an app? I give it a big fail.