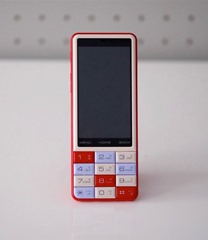 The other day, I pondered what Motorola’s mysterious new video promoting the old RAZR flip-phones might mean, with one possible guess being a smartphone that had a ten-key keypad beneath it. Oddly enough, The Verge posted a story by Sam Byford showcasing a Japanese smartphone line that included a phone that did exactly that.

The Infobar line of phones started out as a candybar phone with a large screen, whose multi-colored design was a reaction against the homogeneity of flip phones that were starting to take over the Japanese market. It gradually evolved into a line of more-generic-looking smartphones, but along the way one model, the Infobar C01, included a 3.2” screen and a 10-key keypad. Of this model, Byford writes:

Through a quirk of phonology that I won’t get into here, a ten-key phone keypad is a really great way to type Japanese, so to have that in a smartphone alongside a touchscreen that you can easily use one-handed is something special. If it weren’t for the CO1’s deprecated software skin that runs atop Android 2.3 and can no longer access the Play store, I would seriously consider using this as my main phone today. That’s quite an achievement for a four-year-old handset that I bought in great condition for about $30. There’s simply nothing like it.

Something else worth mentioning is that, although my mother still uses the $10 smartphone I got her for Christmas, she’s recently picked up a more standard flip phone from Verizon because Verizon has a lot better signal coverage in the rural area where she lives than AT&T who carries Tracfone there. When I pointed out she could probably get an inexpensive smartphone from Verizon, she noted that for actually making phone calls, she prefers a standard phone keypad because it’s just easier to work with.

And that, in turn, makes me wonder whether Motorola might just be planning something like the C01 after all—a smartphone with a physical phone keypad. Not only would it be great for making ordinary phone calls, it might also sell well into the lucrative Japanese market, given that “quirk of phonology” Byford mentions. Plus, if the keys were mappable, I could see it making a great e-reading interface—if you could map the physical keypad buttons to page up and down in an e-reader application, it would be almost as good as the buttons on the Kindle Oasis.

But I’d probably be fooling myself if I thought that was seriously what Motorola was planning. As useful as such an interface might be for folks in my parents’ generation, it probably wouldn’t be an improvement from the point of view of the average smartphone user. Motorola probably has something completely different in mind. It’ll probably be just another generic smartphone with some kind of stylistic nod to the old RAZR—perhaps by being super-thin like the RAZR was. It’s a pity, really. If they could make a smartphone with a keypad work, it might just be useful. Perhaps that might be a good idea for another hardware Kickstarter.

Anyway, sometimes I wonder what the next revolution in smartphone design will be. Google’s Project Ara offers some interesting possibilities, but it’s still too early to tell whether it will take off or just prove to be a gimmick with no staying power. Is the slab-with-a-screen-on-it form factor all a smartphone will ever be?