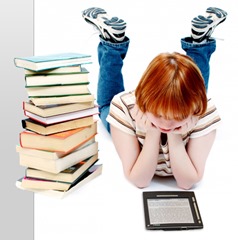 Are Amazon e-books in New York City schools going to lead to even more Amazon dominance in the marketplace down the line? It’s something I’ve been pondering for a while, and I just ran across an article that seems to confirm it as a possibility.

On Business Insider, Andrew Meola reports that the majority of US teenagers shop online, and Amazon ranks as the “preferred shopping website” of 41% of them. This figure is up from 31% in Spring 2014 and 35% in Spring 2015. And while teens don’t have a lot of money, the spending habits they set now will stick with them later in life. While this story is talking about merchandise in general, it’s worth remembering that Amazon is known for books and e-books.

The recent story about Amazon getting a contract to sell e-books to New York City schools reminded me of a scene from Frederick Pohl and C.M. Kornbluth’s brilliant Madison Avenue satire, The Space Merchants, in which ad agency execs discuss how they’ve managed to get public schools to package the good parts of school lunches in the colors associated with their clients, and the yucky parts in colors associated with their clients’ competitors, so kids will grow up with positive and negative emotions already associated with those respective colors.

While Amazon getting the contract for school e-books isn’t anything quite that sneaky, seeing Amazon’s brand name on them is going to strengthen the association of Amazon and e-books in the minds of the kids exposed to them—including the ones who haven’t even gotten to be teenagers yet. That can only help Amazon’s brand further into the future when they’re adults with more disposable income.

Is this “evil”? Not especially—or if it is, not any more so than any other big company that produces products for use by children, or advertises on children’s television, or anything like that. The time when kids could grow up without constant exposure to brand names is long in the past—if it ever existed at all. But I wouldn’t be surprised if it was at least a minor consideration for Amazon when it came to bidding for the contract.

The more this kind of thing happens, the less likely it is that Amazon will abruptly fizzle at some point in the future, because Amazon is reaching future consumers while they’re still young and priming them to continue its commercial legacy down the road. Which is a good thing for people heavily invested in Amazon e-book libraries, at the least. By comparison, who knows what the future of Barnes & Noble’s e-book division is going to look like?