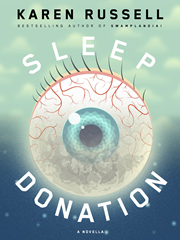 PolicyMic has an article looking at a “digital platform that’s about to revolutionize book publishing.” I have my doubts.

The platform is actually none other than The Atavist, which we’ve covered a few times since it was launched a couple of years back. It started out as a multimedia-enabled e-magazine for long-form journalism, which it still largely is. But it’s decided to bring its multimedia and interactivity chops to the world of books, too, by publishing an interactive, web-enabled version of a fiction book first, then bringing out a “hybrid” print book—“a paperback with the production quality of a hardcover,” whatever that means—once the on-line version has built buzz.

The article talks about the publisher’s debut novella, Sleep Donation by Karen Russell, described as “a dystopian novella about an insomnia epidemic that sweeps America.” The book is told in the form of a series of news updates, which gave the publisher the idea to create a tie-in website featuring other news stories from the same world. Atavist sees its mission as creating “an e-book that does more than just replicate the text of the print.”

For all of that, the Sleep Donation book itself appears to be just that—a bog-standard plain text e-book, selling for $3.99 at Amazon, B&N, Kobo, and other such stores. Checking the sample reveals basically standard text, the same as any ordinary e-book. The article does admit that this is the case, but notes that future works are expected to include “multimedia, multi-level storytelling,” and other interactive features.

So once we strip away all the sparkly rhetoric about interactivity and multimedia and revolutionizing book publishing, what we have here is fundamentally an ordinary e-book with a clever promotional website. This isn’t exactly something new. All the way back in 2003, Max Barry promoted his dystopian corporate novel Jennifer Government with a tie-in website game that briefly went viral. In 2010, Albert-László Barabási tried something similar with his book Bursts. It’s been done for movies and video games, too. In the present day, when we’re being deluged by self-published e-books, a good promotional effort is more necessary than ever to stand out from the thousands of other books that come out every day. If Atavist Books can pull this off for Sleep Donation, bully for them.

But when you start getting into wanting to add interactivity and multimedia and all that, you run into the same problem that most such efforts have. Sure, you might want to make your e-book fancy, but when you get right down to it the current e-book ecosystem is made to support the plain text variety. That’s what e-ink readers are capable of. Vendor lock in might be a thing for moving from one e-book platform to another, such as Kindle to Nook, but it’s also a thing for the format as a whole. As Joanna pointed out a few weeks ago, people who read e-books read them with their specific e-book apps. They might not have space on their device to install a zillion different e-books outside that app’s format.

Even if the book has its own app for reading it within—the Atavist Reader, for example—if you make that reader necessary to read the book, you remove it from the Kindle/Nook/iBooks/Kobo ecosystem and effectively make it invisible to the vast majority of consumers who buy books via and for their Kindle/Nook/iBooks/Kobo e-reader or mobile app. As far as they’re concerned, it doesn’t exist.

(Just look at Baen, who sold perfectly normal, DRM-free e-books, completely compatible with the Kindle and other readers, but still found it worthwhile to make sweeping changes to the way they’d always done things in order to get into those stores—readers kept complaining that they “weren’t on Kindle.”)

In a way, it’s kind of the same situation e-books themselves were in up until Amazon threw its weight behind the Kindle. They were out there, they existed, but they just didn’t fit within most people’s reading ecosystem. It took a major player willing to get behind them and shove for the market to break through.

And that’s leaving aside the entire issue of whether people even want their e-books to be multimedia. I remain unconvinced.

Still, I’ll grant that I could be falling into the same trap of “the way we’ve always done things is the best way” that causes people used to older ways to hate and fear every newfangled invention that comes along, from the printing press to video games. For all I know, it might very well be that, rather than being an unwanted distraction from the text of the story, a multimedia e-book could be just the thing to appeal to today’s short-attention-span social-media-and-video-game generation. But either way, figuring out how to get it widely adopted could be the problematic part. You can’t “revolutionize book publishing” if nobody wants to join the revolution.

Update: This piece has been featured and discussed on The Passive Voice.