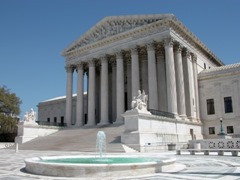 Andrew Albanese at Publishers Weekly has a report on the Authors Guild filing its final reply brief (PDF) in the attempt to gain certiorari for its ten-year-old lawsuit over Google Books. The brief is a reply to a Brief in Opposition filed by Google (PDF) earlier this month.

Now that the case is fully briefed, it can be considered by the Supreme Court, who will then decide whether they want to hear the case fully or simply let the lower court decision authorizing Google Books stand.

Both Google’s and the Authors Guild’s lawyers talk a good game. The Authors Guild says there are circuit splits; Google says there aren’t. The Authors Guild says the appeals court placed too much emphasis on the “transformative” nature of Google Books, and that Google Books wasn’t really “transformative” at all; Google disagrees. While I still tend to come down more on Google’s side, I can see that there’s at least more that’s worth discussing here than there was in the Apple agency pricing antitrust case.

To my inexpert eye, it seems more likely that the Court might deign to consider this case. There wasn’t anything special about the Apple case that necessarily merited discussion by the Justices. For all that Apple tried to manufacture a circuit split and spin its case as special, there really wasn’t anything special about it—it was a bog-standard antitrust case, decided correctly on the merits by both lower courts.

But the Authors Guild makes a decent case that there might be a few real circuit splits. More to the point, the Supreme Court hasn’t considered a major fair use case since well before the modern Internet age kicked off, and there could well be some points worthy of consideration here. I wouldn’t be at all surprised if the Supreme Court decided to hear this one.

That said, I won’t exactly be disappointed if SCOTUS rejects it, either. After all, just as with the Apple case, I feel this one was decided correctly by the lower courts as well.