First things, first. The shovel. The heater. The pipes. The insulation. The windshield scraper. Whatever your priorities would be in the wintertime version of Maslow’s hierarchy of needs.

In Northern Virginia, where I live, it might take several days for the power to return if it goes off—due to the high winds that could imperil workers repairing the lines. The above video from the Associated Press is a day or two old, but so far seems essentially on the mark. Here’s a storm update from the Washington Post, along with the lowdown from NASA. As many as 85 million could be in the storm’s path, according to the latest from CNN. Button up. The good news is that if your refrigerator goes off, maybe you can save your frozen food by putting it outside.

After you’ve taken care of the basics, then what? Carly and I have charged up all our e-readers and phones and UPSes. If the power goes off during Snowmageddon II—with a possible two-three feet of snow expected—I may finally get a chance to finish The Devil’s Chessboard: Allen Dulles, the CIA and the Rise of America’s Secret Government on my Paperwhite.

I had been reading it on my iPad and Nexus 6 cell phone, but with power a little iffy, backlit E Ink might be more fitting, especially at night. No flashlight needed. And a much longer battery life.

So what books will you rely on to get through Winter Storm Jonas? Of course, TeleRead is a global blog, and you’re still free to share your enthusiasms even if you’re logging on from the tropics. But I’ll be especially curious about what others in Snowmageddon country are reading. And don’t just give titles. Tell why you like such-and-such book. In the case of the Devil’s Chessboard, I’ll spell out my thoughts in the future in a review.

If you’re a bit of a contrarian and can’t get enough snow and ice, you can always revisit Jack London’s Call of the Wild (Gutenberg text here, LibriVox audiobook here). Or read Jules Verne’s An Antarctic Mystery (text, audio). Speaking of the M word, a page from Cozy Mysteries Unlimited focuses on “books that revolve around snow storms.” Horror fan? Keep in mind that fearsome winter that set the mood for Mary Shelley when she was writing Frankenstein (text here, audio here). Or how about H. P. Lovecraft’s At the Mountains of Madness?

Or, yes, you could go for the film The Day After Tomorrow or read up on climate change. Um, the phrase “global warming” just doesn’t say it all. 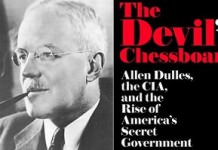