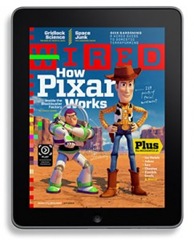 As Paul just said, Wired’s Chris Anderson has proudly reported that the iPad edition of Wired Magazine has gone on-line at last, and the version for other tablets is coming soon. This is the actual print magazine Wired, not the Wired News site that contains original stories and reprints from the magazine.

The magazine was affected by Apple’s 11th-hour ban on third-party development environments. Instead of creating one version for all platforms, Adobe had to create a separate Objective-C-based version of the magazine to meet Apple’s requirements.

While I haven’t bought it myself—I’m saving my money for my ConQuesT trip this weekend—I’ll admit to being a trifle underwhelmed by the price no matter how “enhanced” the magazine might be. Like most other iPad magazines, the Wired app costs $4.99 per issue—whereas a year’s subscription to the print magazine would only cost about $10. However, Wired is planning to make some kind of subscription bundling deal available according to this review by Advertising Age.

John Herrman at Gizmodo also has a similarly underwhelmed review of the app. He says that it is probably the best magazine app developed for the iPad yet—but that really isn’t saying much. The Wired app still suffers from considerable drawbacks: the $5 price point, the 500-megabyte size, the lack of copying, pasting, or sharing, and so on.

As Mike Masnick has said over on Techdirt, there’s really nothing wrong with the web form factor for magazine delivery, and most magazine apps serve to take away flexibility rather than adding it. It remains to be seen, however, whether consumers will agree.