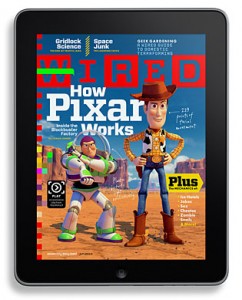 That’s the title of the Editor’s Letter by Wired’s Editor Chris Anderson (well the fantastic part isn’t, but it should be). You can find the full letter here. It says, in part:

The arrival of the tablet represents a grand experiment in the future of media. Over the next few months, we’ll integrate social media and offer a variety of versions and ways to subscribe in digital form. We’ll learn through experimentation, and we will watch closely as our readers teach us how they want to use tablets.

There is no finish line. Wired magazine will be digital from now on, designed from the start as a compelling interactive experience, in parallel with our print edition. Wired is finally, well, wired.

I’ve downloaded the app to my iPad, it costs $4.99, and it is really spectacular. This is not an “enhanced” magazine. This is a magazine that was clearly designed from the start to utilize all the abilities inherent in a tablet. I learned about it’s release while I was on the BEA floor when I ran into a designer whose work I respect tremendously, Peter Meyers (Peter did the incredible 10 Ways to Enhance Your iPad Books presentation at Tools of Change). Peter was really, really excited about the Wired iPad magazine and told me that he thinks they are the only ones so far that really understand what all this is about.

If you have an iPad get the magazine.

Disclaimer: my daughter is a Correspondent for Wired and has two articles in this issue. Just so you know before you spend your money.