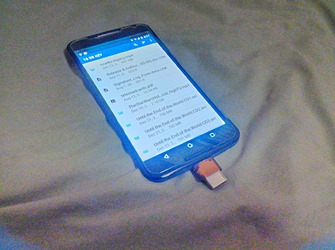 Every time a new Google Nexus device comes out, would-be purchasers are quick to complain that it doesn’t have an SD card slot. In fact, none of Google’s Nexus tablets or phones have had SD card slots—a little odd given that these devices are supposedly Google’s reference designs for Android, but the Android operating system does support SD card use. (Well, sort of. I’ll come to that.)

Google’s reasoning for this omission is somewhat obscure, but the best guess seems to be that Google feels cloud services (such as its own Google Drive) are more than adequate to deal with additional storage needs, and that adding an SD card slot would also bump the price unnecessarily. (Though Amazon certainly seems to be getting by with the one on its $50 Fire tablet.)

From my own experiences with Android devices that support SD cards, I’m starting to think Google may have the right idea. You would expect an SD card to work like a simple expansion of memory: instead of the 8, 16, or whatever gigabytes of internal storage you have to install apps, you get that much plus whatever SD card you put in. Only it doesn’t necessarily work that way. 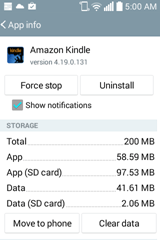 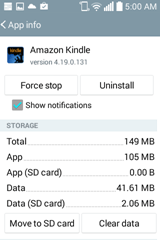 What you get, for devices that support it, is the option to “move” an app to the SD card—only it doesn’t actually move the entire app. For example, comparing these two screenshots from my $10 Android TracFone, you can see that the Kindle app is 105 MB when only kept on the phone—but “moving” it to the SD card puts 98 megabytes of data on the card while keeping 59 on the phone. Not only does it not entirely remove the app from the phone, but it takes up double the space on the card of what it was able to remove from the phone!

It does work better on some apps and devices than others. For example, on my Fire, I can move all but 25 MB of the 3.0 GB “Hearthstone” game to the SD card, which is a decent space-saving measure. But this lack of consistency and the complication of having to install the app first, then move it to the SD card, makes the whole thing seem like more trouble than it’s worth.

On at least some Android devices (such as the RCA Voyager II tablet Nate sent me) you can set the tablet to use the card as its “default write location,” but all that means is the tablet stores application data and downloads there—which can be trivial next to the size of the applications themselves. I have a 32 GB SD card in the RCA Voyager II while I play around with it, but I can’t install the 2 or 3 GB Hearthstone because there’s just not enough room in the main memory to take it. (Adding insult to injury, you can’t even “move” apps to the SD card with the Voyager II. So what good is it even to have a large SD card in it?)

You can use the SD card for storing media, of course—e-books, music, movies, and the like. But if you’re also using the card as a write location or to store apps, it can cause the tablet or phone not to work properly if you remove the card in order to slot it into a card reader to load it up. You can get around that by turning the tablet off, of course, and most devices will let you write to the card while you have the entire tablet connected to your computer, so that’s something, I guess.

But after all this fussing around with SD cards whose space you can use in only limited ways, it makes me appreciate all the more the roominess of my 64 GB Nexus 7 tablet and my 64 GB Nexus 6 phone. I can use every bit of that space for anything I want—applications, downloads, media, whatever. And unless I download a lot of huge games and things, I don’t have to worry about running out of room.

But if I should need to make use of additional space—for example, to load up on some movies I don’t want to have taking up space on my on-board memory—there’s an easier way to do that than having to plug into my computer and sync.

I’ve been playing around with dual-port USB thumb drives—drives that include a standard USB connector and a micro USB connector. They can be had pretty inexpensively, especially from no-name brands, but the one I’m most fond of is this one from EAGET. It’s absolutely tiny, yet it holds 16 GB. (There’s also a 32 GB version available.) I have several video files on it, and have been experimenting with watching them on several of my tablets and phone devices.

And it just works. The tablets notice it right away as soon as I plug it in, then I can watch the movies in the video player of my choice, or copy them over to the device’s download directory, unplug the key, and watch them from there. The nice thing about the EAGET key is that it’s so small, it sits flush against the case of the tablet and it’s not easy to knock loose by accident—so if I want to watch the movies from the drive without bothering to copy them over, it’s simple and easy to do.

Some of the other such drives are longer, and a bit more awkward to have poking out of the case, but it’s not an insurmountable obstacle—especially if you’re just using them briefly, to copy the files over. And the copying can go both ways—if you download something onto your tablet and then want to work with it on a desktop computer, you can simply copy it from the tablet to the thumb drive and then from the thumb drive to the desktop computer.

This will work with any type of files you want to use, including e-books, so if you want to copy your Calibre library onto a thumb drive that you can use as a handy mobile library, this would suit that purpose just fine. It would be a bit more convenient than using Dropbox, especially if you don’t have access to the Internet. But where it really shines are for copying or playing the large media files that would eat up too much time and bandwidth to pull down from Dropbox.

The only drawback to it for me is that it doesn’t work as easily with my Nexus 6 phone, because the case I use doesn’t have room to fit the key in unless I pop the phone out of it. But I could still do that for long enough to copy files from the drive onto the phone and then put it back again.

So, by and large, I’m not going to worry too much about whether the Android devices I get have SD card slots, because they just aren’t that useful overall. But a double-headed USB thumb drive makes a great accessory for almost any Android device, whether it has an SD card or not.