From an ex-Amabot writing in Motherboard (found via a university press employee):

​"​The worst floors were the ones dominated by engineers. I regularly saw people bring their laptops into the bathroom, where they would sit on the toilet and write code. (I’ve never seen anyone clean their laptop after leaving the bathroom.)

“Engineers would talk to each other through stalls.

“On many occasions, I heard people take phone calls while mid-business. It was hard to tell if someone was groaning because it was difficult to code or difficult to poop.

“Another Amazon colleague once joked that this gave new meaning to the word ‘deploy.’"

What’s next? Will Amazon reward staffers with new-style cubicles with potties, so they needn’t take bathroom breaks? And what about Jeff Bezos? A  innovative corporate throne for him to sit on—one with a monitor and keyboard handy?

That’s my imagination. The bathroom story starring the engineers is real life, if we’re to believe Motherboard. I can’t say if the ex-Amabot—at least self-identified as an alum—is telling the truth.

Like the university press guy, however, I wish this stuff could show up just in the Onion. Why has American work life reached the point where we can’t automatically dismiss these stories as lies? 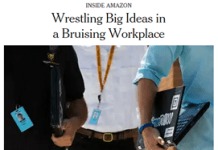