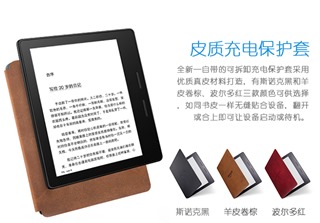 More rumors have appeared about the new Kindle Oasis, via The Digital Reader and The Verge, and a Reddit thread that translates the Chinese material from the original leak (which is now no longer available). The rumors are probably true. But we’ll still use those question marks, given all the spurious information that has appeared in the past about forthcoming Kindles. More photos are available at this Imgur link.

The strangest part is that, apart from physical page-turn buttons, an accelerometer for changing orientation, “60% more” frontlighting LED elements, and its weird asymmetrical design, there really isn’t much at all that’s new about this Kindle. No Liquavista display, no bigger screen, if it has a faster processor they don’t mention it, ditto for Bluetooth and text-to-speech, and it’s apparently not even waterproof the way some people expected. (Or if it is, the documentation didn’t see fit to brag about it, which you’d think it would.)

Maybe e-ink reader sales have just fallen to the point where it’s not worth pouring more money into making huge improvements. Maybe all we’re going to get from here on out are gimmicks and incremental upgrades, because everybody’s moved on to tablets and smartphones. Maybe new e-ink readers aren’t going to sell enough to make back the cost of major upgrades anymore.

One Redditor thinks there’s a good chance this leak could be a fake, as it just seems too strange to be true. But assuming it’s not, it turns out the device’s design bears an odd similarity to one of the very first standalone e-book readers ever made—an asymmetrical hunk of plastic and screen with page-turn buttons along the thicker spine. 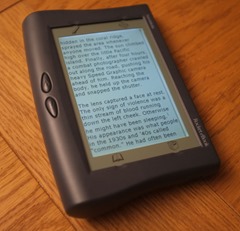 I refer, of course, to NuvoMedia/Gemstar’s Rocket eBook, a liquid-crystal gizmo whose four megabytes could hold as many as ten books at a time. (Wow!) Although the device failed to spark a fad the way the Kindle did with Amazon’s support behind it, leading to Gemstar going out of business, the Rocket nonetheless had a respectable level of adoption for an early-adopter device. It managed to outlive the collapse of its parent company, and eventually, Fictionwise ended up acquiring it. Its eight-megabyte successor, the eBookwise EB-1150 (which featured the same asymmetrical design in a later iteration), was supported all the way up until Barnes & Noble shut down the Fictionwise companies. 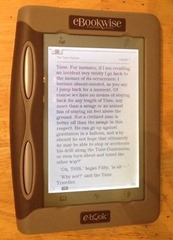 One of the features people loved was the big page-turn buttons on the device’s “spine”, with the ability to switch orientation so you could hold it and turn pages with either your left hand or your right. I don’t know why it’s taken Amazon so long to follow suit—maybe they had to wait until a patent expired?—but you can definitely see the same lineage in the Oasis. It, too, has one thicker edge, with page-turn buttons on it—and a tablet-style accelerometer so you no longer even have to manually change the orientation; just flip the tablet over.

In this case, the thicker edge is good for more than just a handy way to grip the e-reader one-handed. It also provides space for the e-reader’s external battery case to clamp magnetically into place. (This is apparently the “whiskey” and “soda” elements prior leaks have reported.) The battery case and the reader can be charged together, and when you attach the case to the reader it charges the reader’s internal battery first. It’s almost as if Amazon noticed all the people carrying around external USB battery packs and decided it could go one better and build one into the reader.

What’s unclear is why, exactly, e-reader users really need a 20-month standby time. But I suspect the biggest reason for the huge, detachable battery case is to give Kindle users a little extra freedom when it comes to reading while they charge. 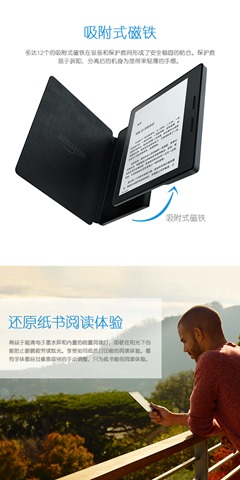 You no longer have to put your Kindle down, or tolerate a long trailing power cable, while you juice it up. Just plug in the case while you read on the stand-alone reader, then slap the case back on and keep right on going while the case charges the reader. Lather, rinse, repeat. You need never be without your e-reader ever again; it can remain permanently glued to your hand.

Of course, I’m not sure why this would have to be such a big deal, as your Kindle will never run out of power if you remember to plug it in every night when you go to bed. But you never know; maybe it is for some people.

Another benefit to splitting the battery is that it lets the device be lighter than prior Kindles, because the battery within the Kindle itself—one of the heaviest parts of an electronic device—can be smaller if you’re going to have a big external pack to clip on.

All this does, of course, presuppose that the leak is legit, and not another fake. Maybe the real Kindle Oasis will look completely different. That still remains to be seen. For now, it might be best to adjust pie-in-the-sky expectations downward in favor of something a little more realistic.