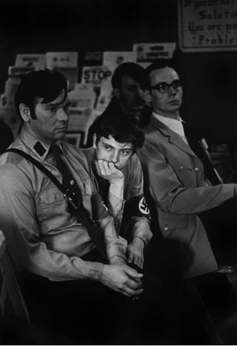 Imagine you’re with the Secret Service. A young Ohioan calls up and says he’ll be joining the Nazi Party. “I wanted you to know.” Wait—the story gets even better. The Ohio man already has been within shooting range of presidential candidates.

J. Ross Baughman isn’t a real Nazi, however. Instead he is a photojournalist for my old newspaper, and he is about to infiltrate the National Socialist movement. My friend is merely trying to keep his name off the Secret Service’s watch list so he can continue his campaign coverage. A letter co-signed by his editor does the trick.

The Nazis think Baughman is just your garden-variety defender of the master race, an obscure wedding photographer helping them honor the teaching of the Fuehrer. Meanwhile Baughman, a gentile of Swiss ancestry, is busy snapping Nazi-gothic photographs for a Jewish-owned daily in Lorain, Ohio, west of Cleveland on Lake Erie. No Zionist conspiracies. As a professional photojournalist, Baughman simply sees the darkness around him as a must-report story.

A fake “wife” even tags along to a “White Power” meeting to show what a respectable, family-oriented soul Baughman is. His attention to the details pays off. Baughman learns that certain Nazis are talking about killing ex-Secretary of State Henry Kissinger “and eleven other prominent Jewish-American business leaders, most notably two Chicago real estate financiers, Arthur Reubloff and Philip Klutznick, along with Robert Sarnoff, former president of RCA, Jack Greenberg, a New York attorney for the NAACP, Paul Warburg, a banker and part of the Rothschild empire, and Howard Squadron, a leader in the American Jewish Congress.”

Nazis left over from Hitler’s Reich are part of the movement that Baughman ran across when highway construction led him to detour through an unfamiliar neighborhood on Cleveland’s west side. In some ways this might as well be a page from The Boys from Brazil. Not all the facts come out at the time, the late 1970s. But the story still makes the international news wires. 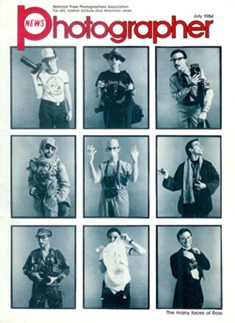 Ben Bradlee and Katharine Graham are among those pushing the Lorain Journal’s Nazi series for the Pulitzer Prize. No luck. But within months Baughman will win the Pulitzer anyway, for his Associated Press photographs depicting torture in Rhodesia. Not bad for someone still in his 20s at the time. In fact, he’s the youngest pro to snare the prize. He’ll eventually go on to the Middle East and also to El Salvador, where he almost loses a leg to a land mine, resulting in the hospital scene below. Baughman will work, too, for Life and other big names in the magazine world. He will also teach at the New School for Social Research and become a photo-and-new-media-related editor at the Washington Times.

Oh, the memories and hard-won lessons Baughman can share in the classroom! While in Rhodesia, now known as Zimbabwe, he did not even have to infiltrate the infamous Grey’s Scouts. His subjects’ vanity could take him a long way. That is no small reason why he was able to fit in and to chronicle the torture scene on the cover of his just-published memoirs, Angle: Fighting Censorship, Death Threats, Ethical Traps and a Land Mine, While Winning a Pulitzer Along the Way (related Website to debut in 2015; old blog here).  Baughman even wore the Scouts’ uniform, all the better to distinguish himself from the Scouts’ enemies. He rode a horse and packed a gun.

Notice a pattern here? Like Leonard Zelig, the chameleon-like character in Woody Allen’s comic movie of the same name, the slightly built Baughman can be anywhere and anyone in a life accurately described as “cinematic.”

“He mingles with Hitler and becomes a Nazi,” Baughman writes of his sort-of doppelgänger. ”He goes to Africa, and even becomes an African American…” Baughman knew the late Mel Bourne, Allen’s art director for years before Allen filmed his 1983 movie. In Angle, Baughman wonders if Bourne perhaps mentioned “to his boss the many stories about me that used Chameleon for the headline.” Woody Allen can be rather shy about his creative process, and his PR woman never answered my query. Who knows if Allen knew? Still, in this world of “six degrees of separation,” where Baughman is so often several degrees ahead in the game, anything is possible. 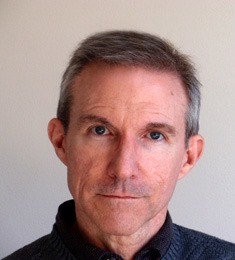 Baughman and I first met while he was a high school journalist fired up about the Vietnam War, student unrest and other issues and I was writing up the confrontations. Sorry for my botched cutline accompanying a story, Ross—the one where your name appeared with a photo of an even more uppity student. The Lorain Journal regrets the error.

In my own days at the Journal I might type into the dawn on my manual Underwood (“work-life balance” isn’t always the highest of priorities at a tightly budgeted factory-town daily), but Baughman outdid me after he signed on as a photographer. Then-Editor Irving Leibowitz recalled Baughman in a column headlined “When a Pulitzer Prize Is Not a ‘Fluke”: “I get to the paper most mornings at about 6 a.m. Frequently I’d see Ross Baughman wiping his eyes coming out of the darkroom. He had slept all night in the photo lab, which was okay with me until I discovered exactly where he slept. Each night, Ross curled up in a two-foot-square cabinet that photographers used to dry negatives. It wasn’t as if he didn’t have any place to go. He did. He had his own apartment. And if he needed any cash, he knew where to turn. His dad was plant manager of Lorain Ford.” The Baughman family lived on the dividing line between Lorain and near-by Amherst, Ohio.

Born in Dearborn, Michigan, Ross Baughman studied journalism and psychology at Kent State University, the site of the 1970 massacre where National Guardsmen killed four students, an event that undoubtedly helped shape his worldview and certainly influenced mine, especially after I talked to survivors. Baughman is now in his 60s, with a son, Henry, to whom he dedicated the book.

Via email, I Q&A-ed Ross on a number of topics—from photojournalistic ethics to whether young war correspondents should get married—and you can read our exchange at solomonscandals.com. 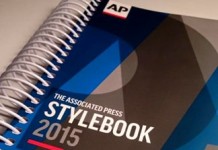 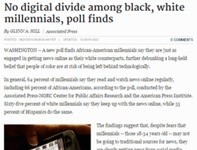 Take the writer out of the loop: Associated Press offers robot reporting

Authors should know when to call it quits

The Associated Press is digitizing its corporate archives