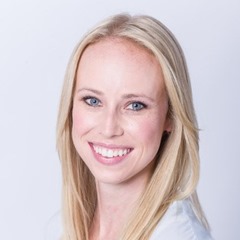 When Katie Donelan four years ago became BookBub‘s third employee and the first one who was not a co-founder, the bargain e-books email list reached fewer than 100,000 members. At BookExpo America (BEA) last month, she told me BookBub now has nearly 70 employees and seven million subscribers.

Donelan, BookBub’s director of business development, is one of my guests on this week’s Kindle Chronicles podcast. In other interviews recorded at BEA, we also hear from a publisher daring to release longer than usual books for young readers, an innovator whose app adds Augmented Reality to paper books for kids, and an author who this year risked publishing a book about a candidate whom few expected to survive his party’s primary.

That last bet, placed by Onion founder Scott Dikkars, is looking pretty good right now, as the subject of Trump’s America: The Complete Loser’s Guide heads to Cleveland in July as the presumptive Republican nominee.

BookBub, based in Cambridge, Massachusetts, made a bet in 2012 on e-mail as a potent e-book marketing tool. The company now receives 200 to 300 requests a day from authors and publishers seeking to advertise eBook deals ranging from free to no higher than $2.99. BookBub’s in-house editorial team chooses only 10 to 20 percent of those deals to feature in a daily e-mail.

“We typically compare it to the college admissions process,” Donelan told me. “You’re applying, and if you get selected you get the honor of paying us to be included in the email.” Donelan earned her BA in the History of Art and Architecture at Harvard, which accepted 6 percent of total applications for the Class of 2019, making her alma mater just a bit more selective than BookBub.

I wouldn’t be surprised if BookBub users read more than Harvard students, based on my own experience on that campus more than 40 years ago. Donelan said more than 10 percent of BookBub members read one book a day, and more than 60 percent read at least one book a week.

That volume of reading helps explain BookBub readers’ interest in bargain e-book prices. Who could afford to pay full price for that many books? But Donelan said fewer than a quarter of BookBub users buy only discounted books; the rest are willing to pay higher prices for authors they really like.

What BookBub offers these power readers is a discovery tool, with 95 percent of members trying authors they have never heard of before. “The vast majority of those readers are very willing to go on and buy other books by that author at higher prices once they know they like the author,” Donelan said.

With this week’s news of Amazon tightening its enforcement of Amazon Associates terms of service, I reached out to Donelan to see what the impact on BookBub might be. So far I have not heard back from her. Given the amount of revenue received directly from authors and publishers for BookBub ads, I suspect that reductions in Amazon Associates commissions do not represent a stake poised at the heart of BookBub.

I also stopped at a booth at BEA featuring children’s books published by Coralstone Press in California. David Hemphill, publisher of Coralstone, noted that a current title, The Good Dog by Todd Kessler, and one due out in September by the same author, The Good Dog and The Bad Cat, are about twice the length of the industry standard for picture books for children 3 to 8 years old. Kessler’s books are more than 1,000 words each and each take about 15 minutes to read aloud.

“The reason that the books are long is because that’s how long this complex story takes to tell,” Hemphill said. “We want to encourage people to rethink how we’re approaching nutrition for the brain.”

The Coralstone books look like the books I remember from childhood, but that’s not the case for a children’s book app named Spellbound, which adds an Augmented Reality (AR) layer to print books. TeleRead’s Chris Meadows reported from BEA on an award that Christina York, co-founder and CEO of Spellbound, received at the event.

Spellbound is available for iOS or Android. You aim your smartphone or tablet at the linked paper book to reveal features like audio reading of the book and images superimposed on the printed page. A young reader can interact with the characters through touch or gestures.

I’m not sure I could have handled AR features on my favorite books as a boy. Babar the Elephant was scary enough on the page itself! Still, I like the creativity evident in this app. I believe you will be inspired by the passion evident in Christina York’s voice when she talks about her startup in my interview with her on the show, especially when she describes how it is being used in children’s hospitals.

In fact, passion may be the connecting link among the four interviews this week. It was certainly exhibited by Scott Dikkers, the founder of The Onion and publisher of a 166-page, fully illustrated book created in five months about Donald Trump.

“I approached this book the same way I approached all of my work on The Onion,” Dikkers told me at his booth, which also featured an eerily convincing Trump impersonator.

“We want to be an equal-opportunity offender,” Dikkers said. “It does not benefit us to make fun of only one half of the readership–I always try to do humor that’s going to appeal to the widest possible audience.”

The Onion, Dikkers said, has gained a reputation for often predicting the future. “There’s a bunch of stuff in this book that we came up with that we thought was outrageous when we wrote it in the fall, and much of it has come true.”

Dikkers did not appear to be joking when he predicted that Trump is going to win the Presidency in November.

“We thought we were going to have a good success with this book for a few months,” he said, “and then he was going to disappear from our lives in November. But this could go on. We could be selling books for another four to eight years—or more.” So stay tuned.

Meanwhile, my interview guest next week will be Jane Friedman, the former CEO of HarperCollins who founded Open Road Media in 2009 and recently moved to chairman with the arrival of a new CEO, Paul Slavin.