Amazon continues its plans to build a chain of Amazon Books bookstores and Kindle showrooms. Fortune has broken the news that it plans to open a third store in Portland, Oregon, to go with the store in its hometown of Seattle and the second store near UCSD in San Diego. There’s no word on the timeframe of the store’s opening; all Amazon says is that it’s “currently hiring store managers and associates.” So, perhaps a few months? 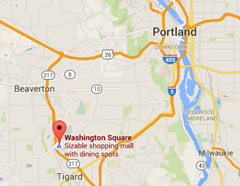 The location is said to be in the Washington Square Mall on the outskirts of Portland. Job listings such as Assistant Store Manager are listed on Amazon’s jobs site. Beyond that, details are sketchy, so Fortune spends the rest of the article recapping prior Amazon Books-related news, such as the great shopping mall CEO quote furor. And there’s also this gem:

I certainly don’t recall Jeff Bezos ever saying that. I believe Amazon was founded, as most companies are, with the ambitions of making money and growing larger. It has managed to succeed admirably at both of those goals. And if part of that “growing larger” involves coming out with more bookstores, then hey—why not?

As with both Seattle and San Diego, Portland is another metro area where Amazon has a number of warehouses, and offers its 1-hour “Prime Now” delivery service. I’m still crossing fingers that Amazon will bring one to Indianapolis sooner or later.