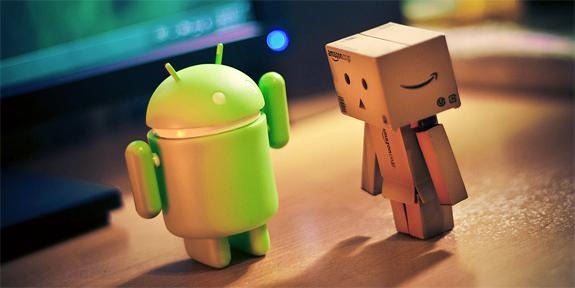 So, investment tea-leaf-reading site Seeking Alpha has a piece by Panabee Research on ways that Amazon could “attack” Android with its new device, presumably a smartphone, it will be announcing this week. Noting that Amazon has historically sold its hardware devices at close to their wholesale cost and made most of its money from content sales, Panabee believes Amazon should go with “a volume strategy and an attack on Android.”

Because Android is so fragmented, Amazon doesn’t require a large market share in order to “threaten Android and present a compelling alternative to developers.” The article goes on to talk about ways Amazon could reimagine its devices with innovative features like 3D, or web apps baked right into the OS.

I suppose that’s one way of looking at things, but what puzzles me is why Amazon should want to. Its devices use their own “fragment” of Android, after all, and it sells apps in its app store that work on plan vanilla Android devices. (It also gives away one app free per day. Today’s is a very pretty Orrerry application. Grab it if you’ve got Android devices!) Why would Amazon want to limit development for its platform only when it can sell apps for practically any Android device out there and skim its retailer’s cut from every sale?

Apple’s the one that’s traditionally about walled gardens. Amazon, with a few exceptions (like Prime Instant Video, grumble grumble), is about openness. It doesn’t care if you read your Kindle e-books on a Kindle fire, a Nexus, or even a Nook tablet. As Panabee notes, Amazon makes its money from content, so it really doesn’t make sense for it to try to outcompete other operating systems. It just has to keep people interested in its content ecosystem, and if they can do that with Amazon’s own devices, that’s just a bonus.

It seems to me Amazon’s device strategy ought to be more about picking up users who aren’t committed to other devices at all yet because none of the ones out there right now appeal to them. If Amazon can figure out a way to appeal to that kind of new device user, then it’s gotten more customers and expanded the overall market.