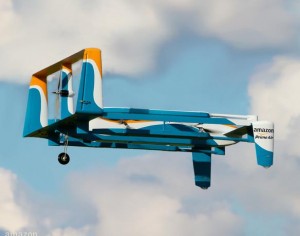 While Amazon talks up its future drones, the company’s deliveries to nonPrime members are now slower than in the past.

“For a long time, Amazon has been the leader when it comes to fulfillment,” Forbes quotes Kevin Hills, research president of StellaService, which measures retailers’ customer service.

“There are 40 companies on our list, and Amazon has always been in the top 10. This year, we’ve seen them fall outside of the top 10, which is the first time we’ve seen that happen…

“They’re investing heavily in Prime and that’s their focus,” Hills says. “That’s where they’re putting all their investments.”

Worried your holiday gift won’t arrive on time? Along with other perks such as Amazon Prime video, that could be a powerful incentive to pay $99 a year for two-day shipping or better on most Amazon-sold items.

According to Consumer Intelligence Research Partners, Prime members spend “on average about $1,100 per year, compared to about $600 per year for non-members.”

I’m a Prime member and, as an individual consumer, a huge fan of Amazon in general. Are you? And what do you think of the future? The $99 a year is a great value for people like me. Then again, what happens when the era of the drone arrives? Will Amazon water down service for nonusers of Prime Air?

My guess is that it won’t, but remember that Amazon isn’t the U.S. Postal Service or your local public library. It is run not for the general public good for people of all income levels, but rather for the long-term benefit of its shareholders. That’s something to ponder as Amazon gets increasingly into the deliver service and eyes not just money now going to UPS and FedEx but also the postal service itself.

Will the Washington Post, now owned by Amazon CEO Jeff Bezos, a libertarian, end up as a powerful voice for the drastic shrinking of the postal service or even its demise? If nothing else, the Post is already gleefully writing about “right-sizing” of the postal service’s distribution center network, in line with the oft-neocon tendencies of the editorial page even before Bezos bought the Post.

More and more, we’ve become a nation of economic tiers, where our income levels determine how long we’ll live or even whether we’ll get divorced. Package delivery of typical merchandise is a trifle in the grand scheme of things. Still, as a symptom of the tierdom we’re now undergoing, it bears watching.

Of course, the ultimate tierdom would be a Blade Runner scenario, with the very richest of us flying off Earth to “off world colonies,” leaving a filthy, chaos-ridden planet behind. And guess who’s in the space travel business? I rather doubt that Jeff Bezos on its own would adjust his Blue Origin fares for low-income people or the middle class.

Whether the issue is delivery of package or people, however, I’ll allow for happy surprises in the tradition of the $50 Amazon tablet. Although reflecting Amazon’s business needs, the tablet actually has helped narrow the digital divide. Similarly, at least for now, Amazon has been a powerful force for lower e-book prices. If, in the end, express delivery charges in the U.S. and elsewhere are actually lower as a result of Amazon’s expansion in this area, I won’t mind.