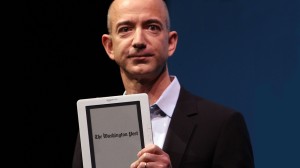 Why can’t Amazon turn a profit? Eugene Wei, who worked at Amazon until 2004, suggests that’s the wrong question to ask. The big question is why Amazon doesn’t want to turn a profit.

In fact, it may even be the wrong line of reasoning altogether. In Wei’s piece on Salon, he points out that Amazon does, or at least did while he was there, turn a profit on pretty much everything it sells, with the exception of specifically-chosen loss leaders (like the infamous $9.99 e-books that drove the publishers so crazy). But the fact that every earning report Bezos delivers shows a paper-thin net income tends to drive the analysts a little nuts. The same quote resurfaces over and over about Amazon being run as “a charitable organization […] for the benefit of consumers.”

This is partly due to Amazon’s habit of keeping its numbers close to its vest—as pretty much any other big tech company does these days. And it may be partly because of Amazon’s competitors’ wishful thinking. But it’s largely because Bezos continues to reinvest Amazon’s profits as soon as they come in, in the name of Amazon becoming ever bigger, ever better. And the true extent of this reinvestment, Wei suggests, really ought to be frightening Amazon’s competitors if they think about it.

You could argue that a business that has to invest so much of its free cash flow to grow is inherently a profitless business model. However, Amazon has known from its very earliest days that selling commodities, the core of Amazon’s business, is inherently a low margin scale business. It won’t ever approach the margins of, say, Apple’s hardware business.

But to me, a profitless business model is one in which it costs you $2 to make a glass of lemonade but you have to sell it for $1 a glass at your lemonade stand.But if you sell a glass of lemonade for $2 and it only costs you $1 to make it, and you decide business is so great you’re going to build a lemonade stand on every street corner in the world so you can eventually afford to move humanity into outer space or buy a newspaper in your spare time, and that requires you to invest all your profits in buying up some lemon fields and timber to set up lemonade franchises on every street corner, that sounds like many things to me, but it doesn’t sound like a charitable organization.

It makes sense to me. I’ve played a number of real-time strategy games in which you have to grow your forces and expand, based on the number of resources you are able to gather. As the game progresses, you are able to gather more and more resources, and buy more and more powerful units, but as your resource-gathering ability goes up, so does the cost of the units, so you’re lucky if you can manage to break even. You generally end up reinvesting every resource you get into better assets as soon as you get them. (And, if you’re me, you still don’t do it fast enough and the computer or other player beats your pants off by out-gathering you.)

And that’s what Bezos is doing. To continue the real-time strategy game analogy, Bezos is done with the piddly little infantry soldiers, and he’s already bought his way up the tech tree into building tank platoons and aircraft carriers by the score. But the people who measure how well he’s doing by how many resources he’s able to pile up think he must be doing badly because he spends the resources as soon as he gets them. To which I would point out, “Well, yes, but look at all those tank platoons and aircraft carriers.”

The most puzzling part of it comes when you look at all that Bezos has accomplished. He essentially invented (and patented) online retail of physical goods. He branched out from books into other goods, and even into e-books. He essentially invented the first working e-reader, and dragged the e-book market from the realm of early adopters into the wider consumer marketplace. Music, video, free shipping memberships, the list goes on and on. What exactly about Jeff Bezos’s track record makes people think that he doesn’t know what he’s doing by now?

Jeff Bezos seems to be like one of those laid-back characters in the movies, the master martial artist who hides his true skill under an unassuming exterior and is content to let everybody else underestimate him. I’m sure that every time that “charity” quote comes up, or the analysts complain about the lack of net income, Bezos probably chortles all the way to the bank. What is he going to innovate next? If I were one of Amazon’s competitors, I would probably not be sleeping well.