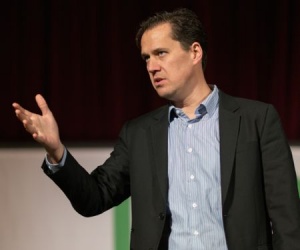 James McQuivey is vice president and principal analyst at Forrester Research. He offers two novel explanations for Amazon’s decision to create the Kindle Oasis, which I reviewed earlier.

“It’s a really interesting move,” McQuivey told me in a 34-minute interview recorded on April 25th for today’s episode of the Kindle Chronicles podcast. The MP3 link is here. The interview starts at 12:00.

“Amazon,” he said, “has tried to of course maintain the relevance of e-readers in a world that moved to tablets and then interestingly enough has moved more and more to large phone form factors.”

He said Amazon could have quietly let the e-reader business stay where it is, but instead accomplished two things by continuing to innovate with the Oasis, which sells for $290 with WiFi only and special offers—$90 more than the previous top-of-the-line Kindle Voyage.

“One, it signals to the die-hard reader that reading still matters to Amazon,” McQuivey said. That’s why the company played with form factor in the new Kindle, moving the center of gravity for more comfortable one-handed reading, made battery life practically infinite, and reduced the weight of the e-reader to where it’s not really an issue anymore.

“They just seem to be obsessed about getting the last couple of grains of rice out of the box, to use that old eighties metaphor from Japanese management science,” McQuivey said. Thus the first benefit of Oasis for Amazon is to “signal to the right people that you still care about reading.”

“The Number 2 reason,” McQuivey continued, “is—look—you never know, this might come back around. There is going to be a world in which there will be other kinds of screens, other than LED screens and e-reader screens. And if you’re the one company that keeps pioneering those screens, then suddenly when those screens are useful in a larger scale, for example, like let’s say they’re on your wall or in rollable form factors, foldable form factors—suddenly they become as compelling as today’s tablets, and maybe even more so.”

McQuivey, a frequent guest on the Kindle Chronicles, this week also discusses the evolution of Amazon’s Alexa platform, which he said is in Wave Two with the recent addition of the Amazon Tap and Echo Dot devices.

“Wave Three is you have like a Glade air freshener-sized microphone that you stick in the wall,” he said, recalling that he had first mentioned this idea to me at Amazon’s introduction of Fire TV in New York two years ago. The Fire TV remote has a microphone in it, for easy search of content, and that led McQuivey to imagine the possibilities of six or eight microphone-only devices per household, for easy customer instructions to Amazon, as opposed to Echo’s combination of microphone and speaker.

“I don’t know that they’re likely to go there soon,” McQuivey says. “It makes more sense for them to keep positioning it as a speaker-aided device. Maybe you don’t turn it into a microphone system the way I envisioned it until you have something like an earpiece, where you put Alexa in your ear.”

When James McQuivey envisions the digital future, I listen carefully. His track record is very good, even to the point of imagining that Amazon would introduce a tablet and name it the Flame—well before the Kindle Fire was introduced in November, 2011.

In this week’s interview you will also hear what McQuivey sees Amazon doing in Virtual Reality and why he thinks technology in the hands of companies like Uber, Airbnb and Amazon “makes scarcity irrelevant.”