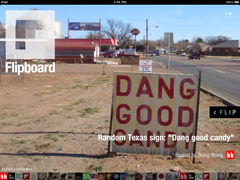 One of the more controversial e-reading apps to hit in recent days is Flipboard, the free app that aggregates content that friends have shared on social media. I’ve previously reported on the controversy it engendered by its potentially copyright-violating aggregatory nature. Lately, I’ve finally had the chance to examine the app itself.

In summary: wow. Flipboard is one of the prettiest things I’ve seen on the iPad yet. And it’s free. If you have an iPad, and are on Facebook and/or Twitter, you have absolutely no excuse not to go and download it. Even if you’re not on social media, it does have some internal channels of content that it aggregates itself (and those who do use FB/Twitter will have to content themselves with these until Flipboard can spare the processor space to let them add their social media accounts. It took about a week for it to come around to me). It’s definitely worth a look.

I’ll go into more detail after the jump, though I’ll first catch up on the controversy, Flipboard’s marketing plan, and media reactions thereof.

First off, Business Insider’s Silicon Alley Insider section has a lengthy interview with Flipboard cofounder and CEO Mike McCue. There’s a lot of interesting stuff here, but one of the most noteworthy statements comes in this early paragraph:

The most interesting thing we learned is how Flipboard plans to make money.  Flipboard plans to actually show more of publishers’ content, advertising against it, and then share revenues. Mike says it will increase publishers’ digital revenues “by a factor of ten from what they’re currently doing with banner ads.”

McCue makes the point that magazine readers tend to prefer magazines with ads, but website viewers don’t want ads even if the content is otherwise the same. He thinks it’s a design problem, and he thinks he can solve it by bringing a more magazine-like environment to the iPad with Flipboard. Flipboard doesn’t feature advertising yet, but judging by McCue’s comments it likely will eventually.

However, Michael Learmonth at Advertising Age isn’t so sure that Flipboard is going to end the decline in digital revenues, and in fact calls McCue’s optimism “ludicrous”. He writes:

Does anyone buy that? A generous $10 CPM for an online publisher becomes $100 when that content is pulled into Flipboard? Seriously?

Learmonth points out that when publishers create their own apps, they at least get to maintain a direct relationship with their readers, instead of having Flipboard as an intermediary.

And another slightly controversial comment from the Silicon Alley interview…

Is Flipboard stealing content? Mike says, “There have been probably about 130 publishers that have reached out to us in the last 4 days or so, and unanimously the reaction has been very positive.”

…comes in for more skepticism from marketing veteran Rex Hammond. Hammond points out that:

[A]nyone who has ever talked with — or even heard of — 130 publishers know there is no such thing as a “unanimous” and “universally positive” response to anything, much less to a product that is even remotely associated with something they may be working on, say, an app on which they’ve bet the future of their company. Such bold-faced hyperbole does nothing but sink ones credibility with companies they must work with over the long run.

So, Flipboard is nothing if not controversial. But from a publicity standpoint, all this controversy is actually good for the product’s publicity—or at least notoriety.

Not that Flipboard really needs the help. In the McCue interview, the Flipboard cofounder notes that Flipboard turned out to be so popular that they had to flip the switch on a usage governor within fifteen minutes of launch. McCue is coy about exactly how many times Flipboard has been downloaded, but did say it represents “a significant percentage of the iPad population.”

But what is all the fuss about? Let’s take a look at the app itself.

If I hadn’t seen it, I wouldn’t have thought it was possible: Flipboard takes the updates and links posted in my social networks and makes them look like an honest-to-goodness published magazine. The interface is amazing, and remarkably well laid out. I’m not exaggerating when I say that it really does look like I’m reading the iPad edition of some magazine that just happens to contain all the links that my social networking friends thought relevant.

It doesn’t just take the links people post, like some social network link aggregators, but it takes the non-link-containing updates, too. Shorter updates are laid out in smaller sections of the screen, like pull quotes in longer articles, while the longer articles (or at least the first few paragraphs) get bigger sections of their own.

It is possible to tap on those short updates and expand them to fill out the screen as well as see replies to them. It is even possible to post replies of your own, using the iPad’s keyboard. Since Flipboard has your login information and permission to post to Facebook (assuming you gave that permission when you set up your account), it can go ahead and post it for you.

Furthermore, there are options for sharing or favoriting articles from within the app itself, or leaving comments, retweets, or reply tweets. Flipboard isn’t just a way to look at the articles friends are sharing, but a whole new way to read and reply to your friends’ posts.

Especially noteworthy are Facebook photo albums, which essentially become full page photo galleries, any one of which can be tapped to view the whole thing.

When you first launch Flipboard, it opens with a “cover” shot, as the first photo of the article shows. Rather than remain static, it starts zoomed in slightly, and gradually zooms out, then changes to another such photo. If you drag the right side of the screen left, like you’re turning a page, it opens up to the interface that lists your Twitter and Facebook feeds, as well as the other feeds the site includes by default. Choosing “Add a Section” brings up a list of websites that can be added as independent feeds. (The “Boing Boing” feed shown at lower left in this photo is one such; I added it myself. Apart from that, Facebook and Twitter, the other four came as defaults.)

The app isn’t limited to portrait view, either, but will also change on the fly to landscape (unless, of course, you have the screen-lock switch enabled.) The displayed portions of photos and articles are changed when this happens. Sometimes the change in displayed area of the photo causes it to lose context, as in this example.

My only serious complaint has to do with how little history the app actually makes available. It only goes back several hours on my busy Facebook, and not much more than that on Twitter. Of course, this is a bit more understandable when you look at one of the comments from McCue in the Silicon Alley Insider interview:

The other thing I didn’t anticipate was the way that people used the product. They use it far more intensely than I thought they would. When people started downloading it they were flipping back to 2009 on their Facebook pages. It was crazy! They just sat there just flipping. Flipping, flipping, flipping, flipping. That stuff takes server time. We have to build pages for every few hundred posts that we go out and get.

So it’s understandable that they’d limit how far back it could go, to rescue their poor abused servers. Still, I could wish it would go farther. On Facebook, I can’t even flip back all the way to see what was going on before I left for work this morning. Oh well, perhaps if they can afford to upgrade the servers.

It would also be nice if it could aggregate posts from my Google Buzz account (which contains the links shared by people I follow on Google Reader) like it does Twitter and Facebook. Given that a lot of them consist of whatever Cheezburger Network lolcat macros my friends happen to find amusing that day, it would be a natural for this kind of iPad showcase.

Yes, there are still potential copyright issues surrounding this application—but they won’t affect you, the user. Therefore, I highly recommend getting on board and experiencing it while you still can do so ad-free. Who knows when they’ll get around to putting advertising in place?