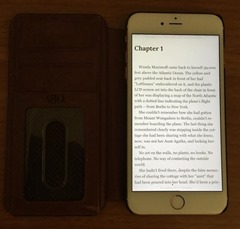 [Longtime TeleRead regular Juli Monroe writes for her own blog now, but she was gracious enough to permit us to reprint this post. —CM]

And to think I used to read on a Handspring Visor and then on a Blackberry Curve. At one point, screen size was obviously not an issue for me. That has changed, and I stopped reading on phones when I got my first Kindle.

A couple of months ago, I replaced my glitchy HTC One M8 with an iPhone 6S+, and I have rediscovered the possibilities of reading on my phone. It’s not going to replace my iPad Mini 4, but for reading on the go, it’s not bad at all.

I gave it a good workout a couple of weeks ago when we were at Disney World, land of the long lines. We only had one brutally long line (over 90 minutes), and I spent most of that wait reading on my phone (when I wasn’t playing Candy Crush Saga), which worked quite well. My main ereading app is Marvin, which uses Dropbox to sync locations, so it was easy to stop reading on my iPad in the hotel room and pick up again in the park. [TeleRead most recently reviewed Marvin here.]

My biggest problems with previous phones has been the aspect ratio. Phone screens are just to narrow for me to comfortably read on. The iPhone 6S+ is still a bit narrow, but the entire device is large enough that I can forget about it as soon as I am lost in the book.

My secondary reading app is Scribd, which doesn’t sync as smoothly as Marvin, but I can make it work. Where Scribd comes in handy is with audiobooks. They were buggy on my HTC, but the app works fairly reliably on my phone. If you are a heavy audiobook reader, their service isn’t for you, but I’m fine with spreading my listening around. I mostly subscribe to Scribd for the ebooks, so any audiobooks I listen to are an added bonus.

One of my great delights in life is reading while eating. I used to take my Kindle and later my iPad with me to a restaurant, but the case I purchased for my phone turns into a stand. It’s a wallet case as well, so most of the time when I leave the house, all I take is my phone, with a credit card and my driver’s license. Handy!

Yes, it is a big phone, and I thought that was going to be a problem, but so far it hasn’t been. I barely notice when I’m carrying it around the house. It fits well in all my bags, and with the sturdy case, I can just carry it in my hand. I wasn’t able to use my HTC one-handed, so I’m accustomed to two-handed use.

I love the phone, not just as an ereader, but for everything else. I won’t watch an entire movie on it, nor will I curl up with it on the couch to read a book, but for almost everything else, it meets my needs. My iPad stays home, and my iPhone goes with me everywhere.

If you have any specific questions about the iPhone 6S+, and what it’s like to carry around a brick masquerading as a phone, don’t hesitate to ask in the comments. I love geeking out over my tech and answering questions.